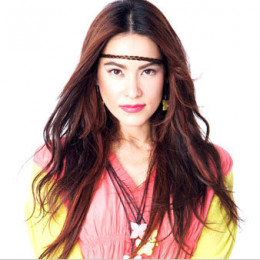 Marsha Vadhanapanich is a popular Thai pop singer and actress. She has been in her career at her small age since 1985. Her music genres are Folk Rock, Country Rock and Acoustic Rock. She is a Buddhist. Her mother Elfriede Erna Ursula Klingbeil is German and father Thanin Vadhanapanich is Thai. She grew up in Thailand and became native to Thai language. She is a successful singer as well as a brilliant actress.

Marsha was married to a Thai actor and singer who was famous in 1980s and 1990s. Their relation was shattered with misunderstanding and they divorced in 1997. They have a son Nawapol Lumpoon who is currently with Marsha. It had been hard for Marsha to grow relations and have a happy married life. She didn’t make out with her boyfriend too and had to break up. She is single at present. She is bold and beautiful even she is in her forties.

Ampol is a Thai singer and actor. Marsha married her divorce husband Ampol Lampoon in the 90s and they separated due to growing disputes in the relation.

Nawapol is only son Marsha and Ampol. He is a actor and is raised up by his mother.