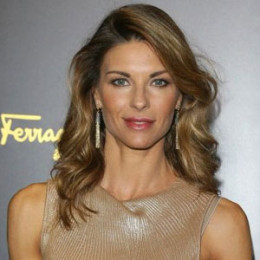 Martina Colambari is an Italian film and Television actress, presenter and a model. She won the Miss Italia beauty pageant and became the youngest winner of the competition during 1991. Colambari hosted several television programs including "Un disco per estate", "Vota la Voce","Super Goleada", and "Controcampo." She also appeared in several magazines. She is married to Alessandro Costacurta.

Martina Colombari was born on 10 July 1975 in northern Italy. She belongs to Caucasian ethnicity. At her young age, she won the title of Miss Italia beauty pageant and the youngest participant in the competition.

She played a recurring role in the TV series "Carabinieri." Apart from acting in television series and movies, she has also featured in numerous magazines like Cosmopolitan, GQ, Diva, Intimita, Max, and Confidence.

Colombari is married to her long time boyfriend Alessandro Costacurta who was a  former player and currently, a coach. They have a son together named Achilles.

Colombari's husband is known for his vocal criticism of homophobia and discrimination against women. In an interview with Italian newspaper, he stated that footballers should be open about their sexuality.

Martina Colombari has appeared on the cover of many reputed magazines. She wears branded clothes and currently uses iPhone 7. Considering her lifestyle, she must probably earn a good sum from her career. However, the exact figure regarding her net worth not yet disclosed.

Colombari is 5 feet 9 inch in height and has Brown hair color with Blue eyes.

Martina Colombari, the former Miss Italia is married to a former player Alessandro Costacurta who is working as a coach recently.

Martina and Costacurta have a child, a son named Achilles.