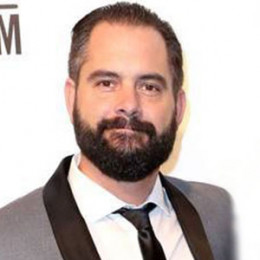 Martyn Eaden is a British screenwriter who is better known for working in movies like Death Factory and Spurned. He grabbed the limelight after marrying the famous American actress and singer Chrissy Mentz.

Martyn Eaden's Personal Life: Know about his Relationships and Girlfriend

Martyn Eaden, British journalist is possibly single as of now and he is out of dating rumors and avoids media attention as much as possible.

Eaden is not as popular as his ex-partner Chrissy Metz, for the very reason, less is known about him. Martyn lived an ordinary life post his split from "This Is Us" cast.

Martyn Eaden and his ex-spouse Chrissy Metz in an event.
SOURCE: Spousewiki

Martyn might still be waiting for the true love of his life while Chrissy has already moved with actor Donnie Berry. Metz and Berry has been kindling romance for over a year and knew each other more than that.

Chrissy, as well as Donnie are so in love that they never lag behind showing affection for one another and often spotted together at PDA. The pair is soon waiting for the right moment to walk down the aisle too.

Martyn was previously married to the famous American singer and plus-size actress Chrissy Metz on 5 January 2008. The duo tied the knot in a Santa Barbara, California courthouse ceremony.

After being together for five years, the pair decided to separate from each other in January of 2013. Next, Eaden filed for the divorce in the November of 2014 stating 'irreconcilable differences'. And the divorce was finalized on December 11, 2015.

What is the Net Worth of Martyn Eaden?

Martyn Eaden holds an estimated net worth of $300,000 all thanks to his career as a writer. Moreover, the average salary of a screenwriter is $60,000-$100,000 which depends on the budget of the film and production.

As being a screenwriter he wrote for films like Death Factory (2014) and Spurned(2016) for which he gained high praise and love from the audiences. The movies were starred with Pej Vahdat, Megan Hensley, Damien Puckler, Randall Bosley and many more.

On the other hand, Martyn's ex-wife holds an estimated net worth of $7 million. She garnered that fortune with the help of his acting and singing career.

Martyn was married to the famous American singer and actress Chrissy Mentz. The duo tied the knot in a Santa Barbara, California courthouse ceremony.