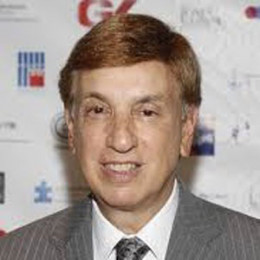 Marv Albert is an American sports broadcaster. He is known as "the voice of the New York Knicks". He has experience announcing other sports such as American football, horse racing, ice hockey, boxing, and tennis. Marv called the Wimbledon Tennis Championships for TNT and radio broadcasts of New York Giants football games.

Marvin Philip Aufrichtig, known as Marv Albert is an American sportscaster born on 21 June 1941 in Brooklyn, New York, U.S to a Jewish family. He grew up along with his two brothers Steve Albert and Al Albert.

He attended Abraham Lincoln High School and later, he attended Syracuse University's Newhouse School of Public Communications. In 1962, he worked as the voice of the AAA Syracuse Chiefs. Next, he attended New York University and graduated in 1965.

In 1967, he began working as the voice of the New York Knicks on radio and television which was offered by sportscaster Marty Glickman. He anchored MSG'S former nightly sports news report, MSG SportsDesk too.

From 1990 to 2002 Albert worked as a lead broadcaster for the NBA on NBC in every NBA Finals except for 1998, 1999, and 2000. Bob Costas called the Finals and took over the position after Albert's arrest for sexual assault.

Later, Marv continued his job for the 2000-2001 season and called Game 4 of the 2002 NBA Finals which was the final NBA telecast on NBC. While in NBC, Marv remained as the lead play-by-play man for the New York Knicks on local MSG Network telecasts and started calling national games for TNT in 1999. When he retrieved the lead broadcaster position on NBC, he resumed calling play-by-play for both networks till the end of NBC'S coverage in 2002.

He worked for NBC for 20 years until he was fired before the 1997-98 NBA season started on The NBA on NBC, where Bob Costas took over for Marv on the basketball side in the 1997-98 season.

Albert remained the lead announcer for National Basketball Association games on TNT. On April 17, 2002, soon after calling a game between the Indiana Pacers and Philadelphia 76ers on TNT, Albert and color analyst Mike Fratello got injured in a limo accident in Trenton, New Jersey. Albert suffered a facial laceration, a sprained ankle, and a concussion.

The 2002 NBA Playoffs were scheduled to start two days later with Marv scheduled to call multiple games that week. He came back to call the game between Dallas Mavericks and Sacramento Kings of the Western Conference Semifinals. During his absence, Bob Costas covered the other games.

In 2004, Marv officially became the lead man for the New Jersey Nets franchise and began calling their games on the YES Network, teaming with Brooklyn native and NBA veteran, Mark Jackson. Starting with the season 2008-09 season, he joined his TNT broadcast colleague Mike Fratello on the YES Network. In 2011, he left the YES Network to join CBS Sports for NFL and NCAA tournament coverage.

He has hosted a basketball-focused interview show on NBA TV. From 2003, Marv provide the play voice on the NBA Live video-games series on EA Sports. From 2011 to 2015, he hosted NCAA Men's Division I Basketball Championship tournament games.

From 1973 to 1976, he called radio broadcasts for New York Giants football games, prevailing Marty Glickman after the latter's desertion to the New York Jets.

Albert managed the call of the Ranger's Stanley Cup- clinching victory in 1994. He gets the nickname "Red Light" for radio analyst Sal Messina, a former Rangers goaltender. Later, he left the Rangers after the 1994-95 season.

Marv was the lead voice on the Westwood One radio network's NFL coverage from 2002 to 2009 seasons. On June 4, 2010, it was declared that Marv was leaving NFL on Westwood One duties.

On June 6, 2011, it was announced that Albert was joining CBS Sports to call for The NFL on CBS, where he teamed with Rich Gannon on broadcasts.

Albert works in many NBC Sports like play announcing for the NFL, college basketball, boxing, horse racing, Major League basketball, and NHL ASS-Star Games. He served as the sports director for WNBC-TV. He called TNT's coverage of the Wimbledon Championships tennis tournament.

In 1992, he appeared on Roger Water's rock album Amused to Death. He became the first guest commentator on MTV's Celebrity Death Match, a  cartoon series.

Later, he appeared on The Simpsons, season 12 episode "The Burns and the Bees" in 2008. He additionally authored an autobiography "I'd Love to But I Have a Game" in 1992 along with Rick Reilly.

The 76 years old, Albert Marv is a married man. He has married twice till date. He first married, Benita Oberlander in 1965. The couple later divorced in 1992. The reason behind their divorce was a lack of understanding. There is no information about his children with Oberlander.

After some years of his divorce with Benita, he married his second wife Heather Faulkiner in 1998. They have four children together son Kenny Albert, who is also an American sportscaster and Brian Albert and daughters Denise Albert and Jackie Albert.

Albert became the main focus among media in 1997, when he was on a trial for felony charges of forcible sodomy when a 42-year-old woman named Vanessa Perhach accused Albert blaming that he threw her in bed, bit her, and forced her for oral sex after an argument in his Pentagon City hotel room in February 12, 1997.

While the trial, testimony was presented from another woman, Patricia Masden, who claimed that Albert had bitten her on two different instants in 1993 and 1994 in Miami and Dall's hotels. She said that in Dallas, Albert called her in his hotel room to help him send a fax, where she found him only with  "White panties and garter belt". After tests proved the bite marks were his, he found guilty and was given a 12-month suspended sentence.

Marv Albert was first married to Benita Oberlander. Later they divorce after 27 years of marriage. The main reason behind their divorce is the lack of understanding.

Marv later married Heather Faulkiner after his first divorce with Benita Oberlander. The couple has 4 children together.

Kenny Albert is the first child of Marv Albert with Heather Faulkiner.

Brian Albert is the second child of Marv Albert and his second wife Heather Faulkiner.

Denise Albert is the third child of Marv Alber from his second marriage with Heather Faulkiner.

Jackie Albert is the fourth child of Marv Albert from his second marriage with Heather Faulkiner.