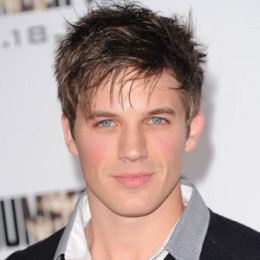 Matt Lanter is an American actor, model, and voice actor, widely known for playing as Liam Court in The CW hit teen drama series 90210, a spin-off of the 1990's Fox series Beverly Hills, 90210. Matt Lanter is a married man and his longtime girlfriend, Angela Stacy is his wife.

Matt Lanter was born on 1st April 1983 in Massillon, Ohio, the United States of America to Joseph Lanter and Jana Burson. He grew up in Atlanta, Georgia along with his sister, Kara.

Lanter spent most of his early days playing baseball, golf, and football. His interest for baseball led him to score a position as a bot boy with the Atlanta Braves.

In 2001, Lanter graduated from Collins Hills High School. His parents got separated when he was a senior at Collins Hill. Matt majored in in Sports Business at the University of Georgia but later moved to Los Angeles to follow his dreams of being part of the showbiz industry.

In  2004, Lautner was a contestant on Bravo's reality show Manhunt: The Search for America's Most Gorgeous Male Model. Sadly, he could not win the competition.

After few weeks shifting to Los Angeles, California, he successfully auditioned for the role of Nick on the Supernatural Teen Drama Fox series Point Pleasant. Lanter landed recurring role throughout the series' first and only season. Since then, he has appeared in television shows such as Grey's Anatomy, Big Love, 8 Simple Rules, Heroes.

Later in 2005, Lanter signed on to become a series regular playing the role of Horace Calloway on ABC's political drama series Commander in Chief.

On 5 March 2013, Lanter co-starred in The CW's science fiction drama series Star-Crossed. In 2016, he began playing the role of Wyatt Logan in the NBC series Timeless.

In December 2006, he was announced to portray the role of Anakin Skywalker for the animated movie Star Wars: The Clone Wars, released on 3rd October 2008 on the Cartoon Network. The film had a huge box office success, as it earned worldwide $69, 182, 844.

Matt Lanter married his longtime girlfriend Angela Stacy. The couple had been in a relationship since 2009. Recently, it was announced that the husband and wife are expecting their first baby in 2018.

Matt Lanter earns a decent amount of money from his successful career as an actor. He has made his appearance in many hit movies including Star Wars: The Clone Wars, which earned total box office of $69, 182, 844, worldwide.
Currently, his total net worth is estimated to be $ 4million.

Matt who plays Anakin Skywaker in both the film and TV series of Star Wars: The Clone Wars married Angela at Calamigos Ranch in Malibu. Their wedding was Star Wars themed and they were accompanied to the aisle by Stormtroopers.