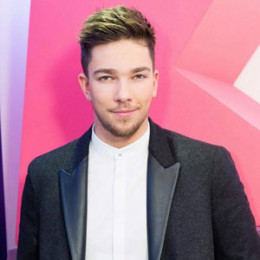 Matt Terry is a British singer, who is the winner of thirteen UK series, X Factor 2016. He was named, Scherzy Boy, by the judge Nicole Scherzinger. His debut single was When Christmas Comes Around, written by Ed Sheeran and Amy Wadge. Currently, his girlfriend is Jasmine with whom he once broke up due to some personal reasons.

Matt Terry was born on 20th May 1993 to British parents. He was raised and did his education in the city of Bromley, Great London, England.

Later, he moved to Spain due to which he can speak fluent Spanish. As he had interest in singing from early days which he turned into his passion and attended D&B Academy of Performance Arts in Kent.

After a breakup with girlfriend Jasmine, Matt gave his first audition in The X-Factor. During that period, he worked as a waiter.

Matt was mentored by Nichole Scherzinger in The X Factor. This singer attracted judges and audience with his melodious voice and was selected for the thirteen UK series, The X-Factor journey. After the elimination of Ryan Lawrie and Freddy Parker, he was the only one left in the team of Nicole Scherzinger.

He did sing-off against Emily Middlemas in week 9, but unfortunately, he reached bottom two which he survived. In the end, he won The X-Factor 2016 on 11th December 2016, beating Saara Aalto.

He was awarded £1 million plus a recording contract with Syco Music. He did The X Factor Live Tour in the UK, Ireland along with contestants Ryan Lawrie, Sam Lavery, Josh Brooks, Gifty Louise, Kyle Brooks, Honey G and so on.

After winning the biggest challenge of his life, he soon released his first single, When Christmas Comes Around, the original song written by Ed Sheeran and Amy Wadge making him the second winner to release an original single the first being Shayne Ward,  the second series winner.

His first self-written song is That’s My Goal. Currently, he is signed with RCA Records, an American record label owned by Sony Music. Moreover, he has collaborated with the King of Latin Pop Enrique Iglesias in Subeme La Radio, or Turn Up The Radio which also featured Sean Paul.

Matt is dating Jasmine Avis. The duo first met on the D&B Academy of Performing Arts in Kent and used to perform together in many shows. The pair broke up before Matt joined The X Factor. He even shared his heart breaking story during the auditions.

The split lasted only for a few months and got back together. They are living together in the city of London.

Matt is one of the rising singing stars who gain popularity after winning the biggest Britain singing show, The X Factor 2016. Being the winner he was awarded £1 and a recording contract with Syco Music, in association with Sony Music.