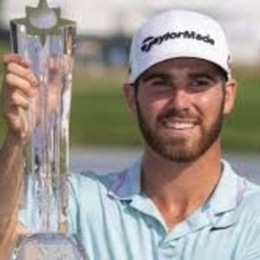 Matthew Wolff is an American professional golf player who is most popular for peculiar preshot twitch, quirky swing, and long drives. On 19 September's third round of the 2020 United States Open, Wolff shot a five-under-par 65 to take a two-stroke lead heading into the championship's last day. Matthew came to media attention after winning the 2019 NCAA Division I individual championship.

Who is Matthew Wolff's Girlfriend?

Matthew Wolff is in a romantic relationship with high school sweetheart Kim Lloyd who is a student at Oklahoma State University. His girlfriend was the one who made his headcover amidst the first PGA Tour win in Blaine Minnesota. 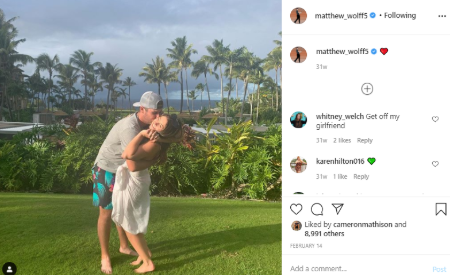 Wolff has been dating Lloyd since April 2019 but made a debut on Shady's social media on May 2, 2019. In the picture, the lovebirds are seen holding each other's waist. Precisely, Kim is quite supportive of her beau as she's often spotted at Blessings Golf Club with him.

Matthew and Kim share an amazing chemistry. Further, the athlete doesn't lag behind showing affection to his beloved either on social media or PDA. His socials are showered with the photos of the two on Instagram.

How Much Is Matthew Wolff's Net Worth?

Matthew Wolff has an estimated net worth of $5 million. He receives an annual salary of $1,152,000 earned through his successful career as a golfer. In addition to that, during the first PGA Tour victory at the 3M Open at TPC Twin Cities in Blaine, Minnesota earned him a $1,152 first place cheque. 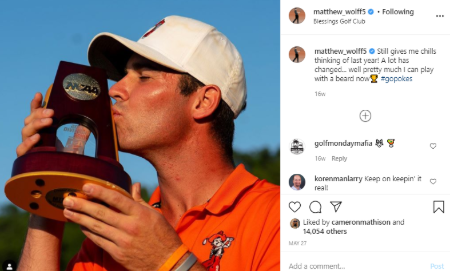 In a July 2020 pre-tournament, Wolf was questioned about how and in what he spent a $1,152,000 check. He answered humbly, mentioning how he used the money to purchase a house. He also assured to be economical and financially responsible with his winnings.

Wolff revealed he didn't get himself a sports car or anything like that as he prefers to live a pretty simple life in regards of going out and spend a bunch of money or buying a bunch of things. Matthew expressed the importance of not being distracted by potential winnings including the prize pool, however, rather focuses on playing the best golf.

Matthew Wolff was born on April 14, 1999, in Simi Valley, California to parents. Shari Wolff and Bill Wolff. He has a brother named Eli Wolff. American by nationality, Wolff stands at a height of 6 ft 0 inches (1.83) and weighs around 73 kg. 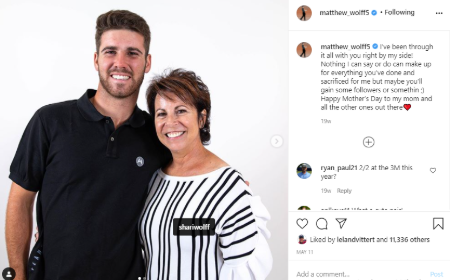 As a child, he began playing junior golf at the Lake Lindero Country Club's Lindero Kids Summer Sports Camp. While studying at Oklahoma State University, he was a part of the Phi Gamma Delta (FIJI) fraternity.

Wolff finished runner-up at the 2017 U.S. Junio Amateur Golf Championship. After subsequently committing to play college golf for the University of Southern California.

Wolff withdrew his commitment to attend Oklahoma State. In the first year, he notably earned four runners up, first-team All-American honors, and the Phil Mickelson Award as the nation's top freshman. He made PGA Tour debut at the 2019 Waste Management Phoenix Open after receiving a sponsor's exemption.