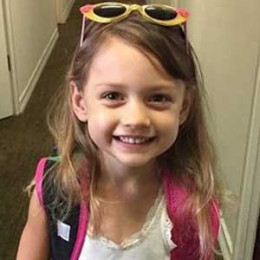 Maya Le Clark is a famous American child actress. She is widely recognized for portraying Chloe Thunderman in Nickelodeon Television series, The Thundermans. She appeared in Ho Ho Holiday which was also aired on Nickelodeon.

Clark was born on 28 March 2011 in Sandiego, California. She has an older sister named Olivia. She is the daughter of father Jason Clark and mother Aimee Clark.

Clark is an American and belongs to white ethnicity. She grew up with her family. She is like any other little girl, is very sweet, adorable and helpful in her real life which matches her character in television series.

Clark previously saw over 50 of her sister Olivia performances. Following her sister footsteps, Maya gave her first audition for The Thunderman, and she played lead character as Chloe Thunderman. She made her first appearance on The Hero Is Born which was aired on Nickelodeon Television series.

Talented actress Clark appeared as a recurring character in the third seasons of Thundermans, and her fans are following her on Instagram and Twitter.

In her Nickelodeon sitcom, Clark portrayed the youngest child of Barb and Hank Thunderman, and she was the youngest sister of Phoebe, Max, Billy and Nora Thunderman. She played on episodes like Phoebe Vs Max Sequel, On The Straight Arrow, Why You Bugging and so on.

Immensely talented Maya is the youngest member of Program Thundermans and was part of the program from 2015. Currently, she is living with her parents, and they maintain all her social accounts.

Charismatic actress, Maya Le Clark is a versatile personality. She played on numerous episodes of Thundermans and recognized as a Supergirl with superpower and baby wobble.

Phenomenal Clark is just five years old, and such young age is well-known globally due to her adorable and cute appearance, no one can resist loving her. Clark is still very young to have a boyfriend and maybe when she becomes age, she will find love.

She currently plays season-4 series of Thundermans as a younger Chloe Thunderman. As of recent sources, she is living a lavish lifestyle and plays in a million.