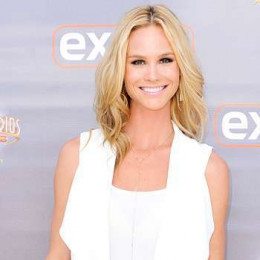 Meghan King Edmonds is an American sales executive and a Television Personality. She is mainly known as a cast member of the television series, "The Real Housewives of Orange County."

Meghan King Edmonds spent her childhood in St. Louis, Missouri. She is the daughter of father Kevin King and mother Julie King. She graduated from the University of Mississippi with a degree in marketing.

Edmonds worked as a sales executive for a pathology software firm. She is currently working as brand ambassador and director of sales at Sweat Cosmetics. She joined The Real Housewives of Orange County as a cast member in 2015.

Edmonds is currently married to former baseball player Jim Edmonds. They married on 24th October 2014. Her husband was previously married for two times. His first wife was LeAnn, and his second wife was Allison Jayne Raski.

Edmonds has no children of her own but has four stepchildren from Jim's previous marriages. Meghan was however married and divorced before which she doesn't want to disclose too many people. She married Brad McDill in July 2007 and separated on October 14, 2011, according to the court documents.

Edmonds has made a huge amount of money from her work. She has the net worth of $5 million as per some online sources. Her husband, Jim Edmonds suceeds to earned a quite impresive sum from his career which is estimate around $35 million.