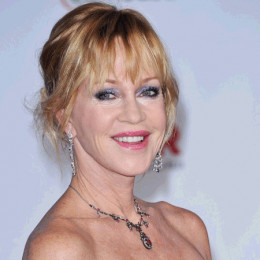 She is an actress, who earned fame after playing in Brian De Palma's Body Double, which let her a National Society of Film Critics Award for Best Supporting Actress. She won a Golden Globe for her performance in Working Girl. She was born to actress Tippi Hedren and former stage actor Peter Griffith. At the age of 16, she graduated from Hollywood Professional School.

Her personal life is full of ups and downs. Till now she has been married four times and all the time she filed for divorce with her husbands.

She married her first husband Don Johnson twice, first in 1976 and later in 1986 but they couldn't make it together so got separated in 1996. The couple has a daughter named Dakota Johnson, 27.

Her second marriage with Steven Bauer lasted for almost five years and they have raised a son together Alexander Bauer in 1985. Her third marriage with Antonio Banderas broke up recently in 2015, which is after 18 years with a daughter named Stella Banderas, 20.

After three husbands and four marriages, Griffith stated that she will never get married again. She told InStyle magazine,

"I really don’t think it’s relevant for anyone anymore. But especially if you’re 60 and you have four kids and you’re living the life you’ve always wanted. Then why get married?"

"It’s, like, I would love to fall in love and have a romance, a relationship, but I haven’t. I keep looking. I’ve had a couple of lovers but not a relationship."

Furthermore, she proudly admitted that she regrets her decision to undergo plastic surgery. Besides, she even got addicted to drugs at some point.

Griffith has an estimated net worth of about $30 million as of 2019. She collects such a huge amount from her career as an actress.

Melanie Richards Griffith was born on 9th August 1957 in Manhattan, New York City to Peter Griffith and actress Tippi Hedren. She has a sister named Tracy Griffith and a brother Clay A. Griffith.

Me and my sis back in the day.... @tracyleegriffith @wyldegallery I love her

Her parents separated when she was just 2. Her father married actress Nanita Greene and has two children with her.

With my beautiful Mama Tomorrow is her birthday!! Happy Birthday Tippi!! 89 and awesome!!

She studied at the Hollywood Professional School. In 1975, she performed opposite Gene Hackman in film noir Night Moves.

She received a Golden Globe, and a nomination for the Academy Award for Best Actress for her role in 1988's Working Girl.

He is the second husband of Griffith, who was her co-star from the TV film She's in the Army Now.

He is a Spanish film actor. They were co-stars in the film Two Much. They have raised a daughter from their 18 years of marriage.

He is the first child of Griffith, whom she gave birth at the age of 28.

She is the second child of Griffith, whom she gave birth at the age of 32.

She is the second daughter of Griffith, who was born safe and healthy.