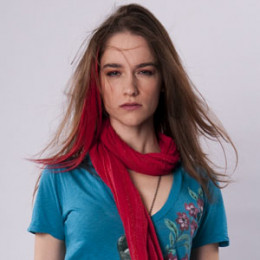 Melanie Scrofano is a Canadian model and actress. She is well known for portraying Rebecca on the CBC drama series, 'Being Erica.' She has won E! Awards in 2017.

Melanie Scrofano is a Canadian model and actress who was born on December 20, 1981. She is well known for playing the part of Rebecca on the CBC drama series Being Erica. She is also popular for her role in "Wynonna" Earp, The Listener and others.

Scrofano holds a Canadian nationality and belongs to Italian and French-Canadian descent. She grew up in Ottawa, with her parents. her father is an engineer and mother served as a government worker. She attended high school in her hometown.

Before starting her acting career, Scrofano worked at an ice cream shop. She began her career at the age of 13 as a model and featured in a lot of magazines, which include Cosmo.

After earning popularity as a model, Scrofano began her acting career in 2002. She played the role of Isobel in the TV series, "Undressed.” She also appeared in many television series including Mob Stories, Naked Josh, and many others.

Scrofano rose to fame after her portrayal as Rebecca on the CBC drama-comedy series, Being Erica. She made her film debut in "Baby Blues" in 2008. She appeared in few films like Nurse 3D, Saw VI, and Wolves.

Scrofano has played the recurring role as Tia Tremblay in a Canadian fantasy drama, The Listener. She made her appearance in the 2014 movie, Robocop. She portrayed Gena in the 2009 movie, Saw VI.

The Canadian actress is a married woman and has a son. She tied the knot with Jeff and the couple has a son. She currently resides in Canada with her husband and son.

She is quite secretive regarding her personal life and prefers to keep it low from the limelight.

Once in an interview with SYFY when Melanie asked about the weirdest place she kissed she answered Union Station in Toronto.

Currently, she is living a blissful married life with her husband and son and there isn't any kind of rumors regarding her split or divorce with Jeff.

Melanie Scrofano has a projected net worth of $1 million. She has been active in the television and film industry since 2002. Her major source of income comes from her acting career. She has won E! Awards for Girl on Top in 2017 for her work in Wynonna Earp.