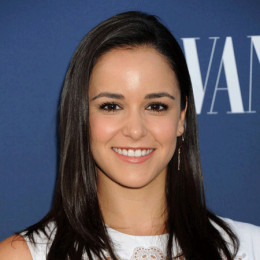 An American actress, Melissa Fumero who got vast popularity after she portrayed the role of Adriana Cramer on One Life to Live. She is a daughter to Cuban parents who moved to the USA when they were teenagers. She holds a degree in Bachelor of Fine Arts in Drama from New York University. From her young age, she was an avid fan of dancing and she loves going to the theater as much as possible. She has starred in popular films like Brooklyn Nine-Nine (2013) and The House That Jack Built (2013).

Melissa Fumero is married to her boyfriend turned husband, David Fumero. The couple tied the knot in 2007 in the presence of their relatives and close friends.

Well, they first met on the movie set of One Life to Live where he was the co-star of the movie along with her. Eventually, they started dating and the rest is history.

Happy Birthday @davidfumero! Your talent never ceases to amaze me. Your omelettes are delicious. Your stamina for playing with Enzo is beyond. Stop finishing my coffee and you’ll pretty much be perfect. We love youuuuuuuu

The husband-wife couple shares a child, Enzo Fumero together. The child completed their family.

Melissa Fumero has an estimated net worth of $2million. Her major source of income is her acting career.

He is a Cuban-American actor and also former model. After dating two years they got tied in knots. Couple hasn't given birth to any children yet.