Home Article Is Melissa Fumero Pregnant? Has A Son With Husband David Fumero; Is Married Since 2007

Is Melissa Fumero Pregnant? Has A Son With Husband David Fumero; Is Married Since 2007 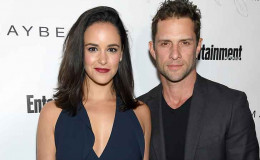 Age 36, beautiful American actress Melissa Fumero is married to David Fumero, shares a son named Ezon Fumero, married in 2007 and are together for 11 years, no controversies yet, Melissa's married life, affairs, rumors, dating,

The beautiful actress in Hollywood who has done a handful of big-screen projects, Melissa Fumero is an uptight cop in the show, Brooklyn Nine-Nine but in real life, she is a laid-back mom of two years old.

Married to her One Life to Live co-star, David Fumero for over a decade, the actress is living a beautiful married life with her husband and son in Los Angeles. What is the story behind their love life? When did they start dating? Wanna know about their relationship in detail? Check out the article below!

Married To The Husband Of More Than A Decade, Melissa's Married Life With Her Husband!

Melissa and David are having joyful days in their lives with the baby of 2 years!

Also Read: Stephanie McGovern, After Pregnancy Rumors Comes Clean THat She's Not Pregnant: Is she Dating Anyone Right Now?

The Brooklyn Nine-Nine star Melissa Fumero is married to her long-time husband David Fumero. They met at the sets of "One Life to Live" and were drawn to each other right then. 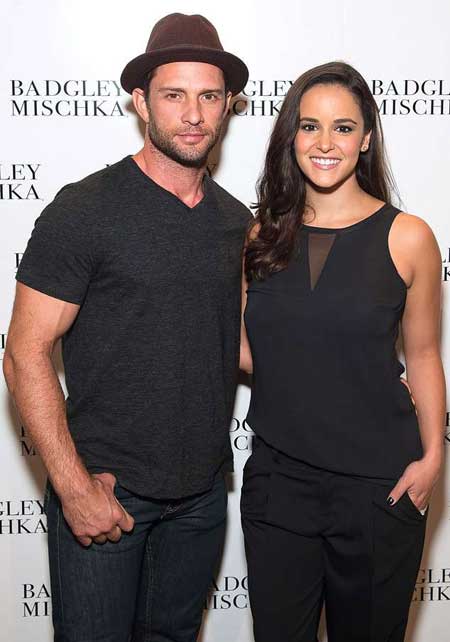 Melissa and her husband on the red carpet
Source: EOnline

The former One Life to Live co-stars tied the knot in 9th December 2007. The duo is parenting a son named Enzo Fumero who was born on 24th March 2016 at 1:30 p.m weighed 7 pounds and measured 19.5 inches with 'a lot of dark hair'. She said in an interview with people,

“My husband and I have been together a long time. It’s very special for us and we’re just really happy and excited.”

News of her pregnancy was announced by her on Instagram which featured a number of friends on her baby shower. She captioned the picture with, "Amazing time at our surprise baby shower yesterday. Oh, PS—I'm pregnant,"

The sitcom star was 9 months pregnant while filming on the show. She warned about the experience she had on the red carpet outside the SVA Theatre in NY City,

“My ankles would get really swollen, Enzo was born, like, five days after we wrapped. I don’t recommend it. It’s hard to think about anything other than being pregnant when you’re that pregnant”

Both the couple is active on their social media and often share pictures of each other with their children. A few days before, David uploaded a picture of them going on a nice romantic dinner date on Melissa's birthday.

He captioned the picture with a lovely message,

"Early bday celebration for the Missus. Been a minute since we’ve dined alone. HAPPY BIRTHDAY GORGEOUS!"

Melissa also wished her husband on their anniversary posting a cute Instagram picture with a cute caption, "Hey @davidfumero, I like you a lot. Let’s do this for another 10 years. #Milestone #Anniversary"

Hey @davidfumero, i like you a lot. Let’s do this for another 10 years. #Milestone #Anniversary

The couple is living a blissful life and lets us wish we could hear more lovely news about their married life pretty soon.

Got TV Role While Still In College, Melissa Fumero's Story To Limelight!!

Melissa was the second actress to portray the role of Adriana on the series One Life to Live that she won on the last day of her University. She joined the cast in 2004.

The actress then decided not to renew her role in the series but still returned to the show in 2008 for a 15-episode run. She made her big-screen debut in a lead role in the 2009 movie, Tiny Dancer. 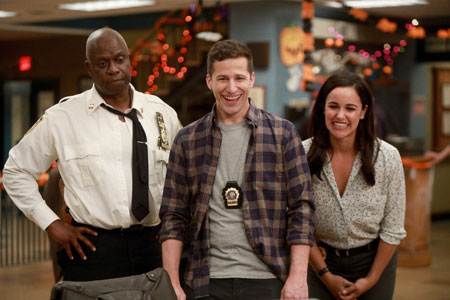 Melissa with her husband on the show Brooklyn Nine-Nine
Source: Time

She then appeared in six episodes of the CW's series Gossip Girl as Zoe the following year. Fumero was then cast as a member in Fox's Brooklyn Nine-Nine as Amy Santiago for which she won the NHMC Impact Award in 2015.

She was also nominated for an ALMA Awards and two Imagen Awards. 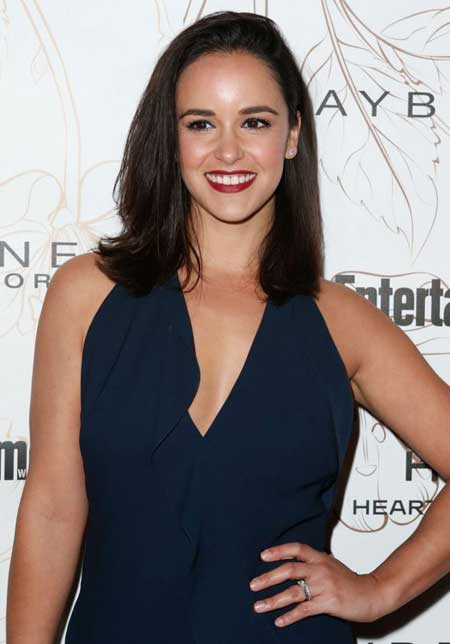