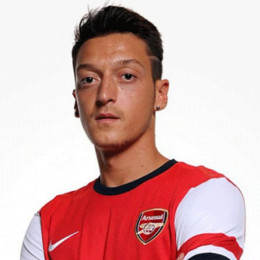 A profession footballer from Germany, Mesut Ozil is currently playing in the English club Arsenal and in the German national football team as an attacking midfielder or winger wearing jersey number 11. He is known best for his fitness and stamina. He is best team mate for assisting goals and his team manager compares him with Zinedine Zidane. He started his youth career at Westfalia 04 Gelsenkirchen in 1995 and made his professional debut in 2006 from Schalke 04.

He is currently in a relationship with Miss Turkey, Amine Gulse. Previously, he dated singer Mandy Capristo in 2013 but they broke up in 2014.

He amassed a net worth of about $50 million as of 2019. He is currently playing for English side Arsenal but details about his fees and contract duration is not revealed but it is believed that he received around £42.5 million (€50 million) for a five-year deal.

Mesut Ozil was born on 15 October 1988 in Gelsenkirchen, West Germany.