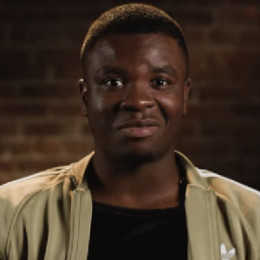 Michael Dapaah is an English actor, rapper, and comedian, well known for his appearance as the fictional rapper Big Shaq. He is also noted for his mockumentary SWIL, which focuses on four characters and their adventure to success.

The famous rapper a.k.a Big Shaq was born on 10 August 1991, in London, England. He is of Black ethnicity and holds British nationality. Son of Joseph Dapaah and Ghanaian Dapaah, he was raised along with his two siblings Edward, and Heather.

Michael Dapaah began his career as a motivational speaker after his graduation. He traveled to different places in the UK giving motivational speeches. Dapaah came into limelight after his videos and contents.

Michael Dapaah stepped into the entertainment business by gathering social followers through his own series of short comedy scenes, and his comedic online skits. He then adapted the skits into a mockumentary series on his YouTube channel, Michael Dapaah, titled, SWIL(somewhere in London). The first episode of the series gained more than one million views and created up to six episodes.

Dapaah made his appearance on the Charlie Sloth's BBC Radio 1Xtra show, Fire in the Booth. making him realize the rapid growth of his fan base. He released the comedy rap song Man's Not Hot on 22nd September 2017, which became viral. In December 2017, he released the music video of the song that starred cameo's from Lil Yatchy, Waka Flocka Flame, Dutch rap-group Borderline, and DJ Khaled.

The video was viral all over the world, on YouTube, and other social media, which turned out to be a catchy meme worldwide,

Since the song, Michael Dapaah is well recognized as Big Shaq than Michael Dapaah. The rap song was certified gold and one-time platinum certified. Moreover, the song has attracted more than 195 million views to date.

His song Man's Not Hot' earned him a big popularity. He was also listed as the best black British comedian by Black British Entertainment in 2017.

The famous rapper Big Shaq is single currently and has no children. Dapaah is very secretive and confident regarding his personal affairs and dating life. Michael Dapaah wishes to hide his personal life from the public.

Michael Dapaah seems to be earning a good amount of money after his comedy rap Man's Not Hot. At present, his total net worth is estimated to be in thousand dollars.

He generates $153.5k to $2 million annually from his YouTube channel with over 800 thousand subscribers. He also makes money selling T-shirts with Big Shaq printed on it.