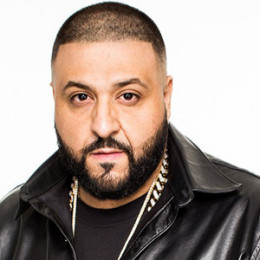 Khaled Mohamed, better known as DJ Khaled, is a famous American DJ, record producer, and music executive. He gained popularity for his songs including Kiss the Ring, We the Best, We Global, Victory, We the Best and Suffering from Success. He is a radio host for the Miami-based urban music radio station WEDR 99 Jamz and DJ for the hip hop group Terror Squad. He is also a president of the record label Def Jam South and the CEO and founder of We Changed a Lot. For his success in the music world, he received different awards including DJ of the Year, MVP of the Year and Hustler of the Year. Currently, he is in love relationship and is engaged with Nicole Tuck: as the couple is also blessed with a baby boy, Asaad.

DJ Khaled was born on 26th November 1975 to Palestinian parents in New Orleans, Louisiana. His parents were musicians and played Arabic music. He grew up along with his sibling brother, Alec Ledd (Alla Khaled) who is an actor.

From an early age, he showed interest in music especially rap and soul music; for which his parents were fully supportive of him. He started working at a local store which helped him to lay the foundations for his music career.

During the period, he was familiar with Bird, Lil Wayne, and Mavado, when he was working with Orleans record store Odyssey. He also helped them before their breakthrough. Later, he left Odyssey and started working as a DJ in reggae soundclashes, mixing dancehall and hip-hop. He also works as a radio gig on a pirate station.

In 1998, he joined Miami and co-hosted The Luke show on WEDR 99 Jamz along with 2 Live Crew’s Luther Campbell. At the beginning of his career, he went by the name Arab Attack, but changed it after the September 11 attacks, as he did not want to appear insensitive.

From 2006-2008, he released his three consecutive albums; Listennn… the Album, We the Best and We Global. His first album was released by Koch Records which debuted on the US Billboard 200 chart at No. 12. In his second album, he released a single 'I’m So Hood 'with T-Pain, Trick Daddy, Plies and Rick Ross and We Takin’ Over with Akon, T.I., Rick Ross, Fat Joe, Birdman and Lil Wayne.

His second song 'We Takin' Over' was listed No.28 on the US Billboard Hot 100 and No.11 on the US Hot Rap Tracks chart. Also, the song was certified Gold by the Recording Industry Association of America in November 2007.

In 2008, he released his third album where he has sung 13 songs among which Out Here Grindin and Go Hard was popular among the viewers. Also, RIAA certified the single I’m So Hood, platinum and the same year he was honored DJ of the Year awards from the BET Hip Hop Awards and Ozone Awards. The following year, he was appointed the president of Def Jam South.

In between 2010 to 2012, he released three albums including Victory and We the Best Forever. Among which Kiss the Ring became one of the favorite album among the viewers. The album released on 21st August 2012 which featured T-Pain, Wiz Khalif, French Montana, Future, Ace Hood, Jadakiss, Kiroko Bangz, Mac Maine, J. Cole and much more.

His first single from the album was Talk It to the Head which featured Chris Brown, Rick Ross, Nicki Minaj and Lil Wayne. In June 2011, he also performed the song; I’m On One at the BET Awards 2011.

Apart from this, he has released four other album which includes Suffering from Success in 2013, I Changed a Lot in 2015, Major Key in 2016 and currently he is working on his tenth studio album, Grateful which he announced through his Twitter account in December 2016.

According to the sources, he was seen in the studio on his Snapchat with collaborators such as Chance the Rapper, Justin Bieber, Migos, and Mariah Carey, in January 2017. He made his first single Shining from the album, Grateful which was featuring Beyonce and Jay Z on iTunes and Tidal.

Moreover, he has written a book, The Keys, which included his own opinions on success, real-life stories, and contributions from the music moguls. Also, he is an internet personality, and some of his Snapchat videos was mainly popularized by the YouTube channel, h3h3Productions.

DJ Khaled is engaged to his long-term girlfriend, Nicole Tuck, in 2013, though he is yet not married and is blessed with a baby boy, Tuck.

The couple first met when Nicole founded a small clothing business, ABU Apparel which was first and foremost endorsed by DJ Khaled in 2011. The love story between the couple began since then after their first visit.

The couple is still not married somehow there is no any news regarding their divorce and rumors.

According to the sources, there was a rumor between Nicole and Nicki Minaj in 2013. Also, MTV stated that the proposal came around the time when Khaled was releasing his new song I Wanna Be With You. Yes, he proposed to Nicki but it was just a joke. Later, Nicki revealed that she and Khaled were like brother and sister and the proposal was just kidding.

Later, Nicki revealed that she and Khaled were like brother and sister and the proposal was just kidding.

DJ Khaled is one of the successful DJ and Rapper who has released ten successful album in his lifetime. Besides singing, he has also co-hosted few of the TV shows as well as released a book too. In this way, he has successfully accumulated an estimated net worth of $20 million from his career.

He lives in a lavish bungalow situated in Beverly Hills which he purchased from British singer Robbie Williams in $9.9 million. The bungalow is an impressive 10, 681-square-foot Mulholland Estate. The house has seven-bedroom, eleven-bathrooms and sits on almost three-fourths of an acre.

He is fond of having luxurious cars and has got very luxurious cars in his garage among which his favorite one is Rolls Royce Phantom which featured in one of his music videos. Not only cars but also he has bought a Tour Bus in 2011 that has got leather seats, door, freeze and much more.

Born on 23rd October 2016, Asahd is the one only son of DJ Khaled and Nicole Tuck.