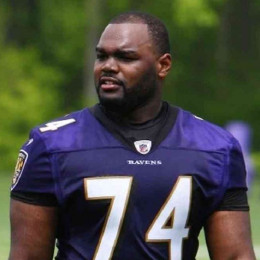 Michael Oher, 33, is an American football offensive tackle currently serves as a free agent. He was the subject of Michael Lewis's book 'The Blind Side' which includes his final year of high school and the first year of college. There was also a movie with the same name, "The Blind Side: Evolution of a Game" which released in 2009.

Oher had a difficult childhood as his mother was an alcoholic and his father was killed in prison. When he was 11, he was taken into foster care.

He joined the Briarcrest Christian School where he was coached by Hugh Freeze and Tim Long. He, in 2003, became the Division II (2A) Lineman of the Year.

He studied hard to get admission into a school of Division I of ‘National Collegiate Athletic Association’ (NCAA).

The different university offered Oher scholarship, but he chose to play under the guidance of coach Ed Orgeron for the University of Mississippi. Initially, he started playing as a guard during his first season with the Ole Miss Rebels and became the first-team freshman All-American.

In 2006, he became offensive lineman of the second-team ‘Southeastern Conference’ (SEC) after his junior season. During this period, he not only improved his games but also enhanced academically.

Michael Oher began his professional career in 2009 as The Baltimore Ravens drafted him as their 23rd pick in the NFL Draft and provided him jersey number 74. He signed a five-year contract with Baltimore Ravens playing at the right tackle position and later shifted to the left tackle position, but in eight weeks he again moved to play as the right tackle.

You May Like; Steve Nash Wiki-Bio, Personaln Life, Net Worth

In 2013, Oher won ‘Super Bowl ring,' which was his first since his football career began. The following year, he signed a four-year contract with the ‘Tennessee Titans’ team. However, owing to several injuries he missed many games, so, Titans terminated the contract in 2015.

Just after his departure form Titans, he signed with the ‘Carolina Panthers’  as the left tackle.

In 2006, author Michael Lewis involved the life story of Michael Oher as one of the subjects in his book, ‘The Blind Side: Evolution of a Game.' The book was the best seller of the New York Times. Later, in 2009 the book was adapted for the film of the same name, The Blind Side which was directed by John Lee Hancock.

In 2011, he launched his autobiography I Beat The Odds: From Homelessness to The Blind Side and Beyond.

The current relationship status of Michael Oher is possibly single. He is very reserved regarding his private stuff and prefers to remain silent about his personal life.

Oher is at the highest peak of his career, and that might be the reason that he is single. Maybe he wants to focus all his energy towards his games, not in a relationship.

Oher is one of the richest football players. He has an estimated net worth of $20 million. In 2009, he signed a five-year contract with Baltimore Ravens for $13.8 million.

Later, he was signed by Tennessee Titans for a four-year contract for $20 million. In 2015, Oher signed $7 million contracts of two years which were extended in 2016 for 3 years at $21.6 million with $9.5 million guaranteed. Also, the movie based on his life earned an impressive sum of $300 million at the box office.