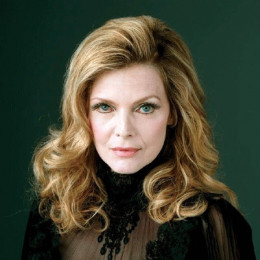 An American actress and singer who is better known as the actress of blockbuster movies like Batman Returns, Wold, and What Lies Beneath. She is daughter to Donna Pfeiffer, a housewife and Richard Pfeiffer, a heating and air-conditioning contractor. In 1976, she graduated from Fountain Valley High School. She attended The Beverly Hills Playhouse where she learned acting. At first, she used to work in a work in a clothing store.Later in 1980 she debuted in film industry through the movie named The Hollywood Knights. But it was only after she starred in Scarface (1983) after which she earned vast media and public attention. Till now, she is three time nominee of Academy Award for her performances in popular movies like Love Field, Dangerous Liaisons and The Fabulous Baker Boys.

Michelle Pfeiffer was born on April 29, 1958, in Santa Ana, California to Richard Pfeiffer, an air-conditioning contractor, and Donna (née Taverna), a housewife. She is the second child of his parents. She is  American and belongs to the mixed ethnicity.

She was raised along with his three siblings; elder brother, Rick and two younger sisters, Dedee Pfeiffer, a television and film actress, and Lori Pfeiffer in Midway City.

Pfeiffer completed her graduation in 1976 from  Fountain Valley High School. Later she joined  Golden West College where she was a member of  Alpha Delta Pi sorority. She also worked as a check-out girl at Vons supermarket.

In 1978, she won the Miss Orange County beauty pageant and the same year she participates in Miss California where she finished with 6th position. After that, she started auditioning for series and movies.

Michelle Pfeiffer began her acting career with minor roles in sitcoms like Fantasy Island, Delta House, and B.A.D. Cats, Falling in Love Again, The Hollywood Nights and many more.

In 1982, she got her first major break in the American musical film Grease 2 where she portrays the role of Stephanie Zinone.Later she was cast in Scarface which helps her to gain public attention.

Afterwards, Pfeiffer appeared in several movies including, Ladyhawke, The Witches of Eastwick, Married to Mob, Dangerous Liaisons, The Fabulous Baker Boys, The Russia House, Frankie and Johnny, Batman Returns, The Age of Innocence, Dark Shadows, People Like US and many more.

In 1990, she won two awards for two different movies, she was awarded BAFTA Award for Dangerous Liaisons and Golden Globe Award for The Fabulous Baker Boys. The same she appeared on the first edition of People Magazine’s list of ‘50 Most Beautiful People in The World’.

Talking about her personal life, she is married to her boyfriend David E. Kelley who is a television writer and producer. Actually, they went on a blind date where he took her to watch a movie named Bram Stoker's Dracula and they instantly fall in love with each other and eventually got married too.

The couple parents one son, John Henry and one adopted daughter, Claudia Rose. Prior to being married to him, she was also married to Peter Horton in Santa Monica. According to her, their devotion to work was the reason behind the failure of her first marriage.

She was also romantically involved with actor-producer, Fisher Stevens after the failure of her first marriage but this relationship also couldn't last long and they split apart after three years.

She is a vegan and a supporter of the ‘Humane Society’, a group which aims is to stop human and animal suffering.

Michelle Pfeiffer is one of the A-lists Hollywood actresses who worked on more than 40 movies and also known as one of the highest paid actresses. Her estimated net worth is $80 million.

In 1987, her movie, The Witches of Eastwick grossed over $63.7 million domestically which is equivalent to $134.4 million in 2016. She portrays the character of Catwoman in Batman Returns (1992) which succeeds to collect over $266 million at the box office.

She owns a luxury property at BC’s coastline which cost around $28.8 million. Besides this, she has a collection of many expensive cars and gadgets.

He is an American actor. They first met each other at an acting class in the early '80s. Their marriage ceremony took place in Santa Monica. Their dedication in work is cited as the reason behind their breakup.

Professionally, he is a television writer and producer. They fall in love after they went on a blind date. Together the couple is blessed with one son and one adopted daughter.

She was adopted by her before she planned to get married with David.

He is the only son from her second marriage. He is named after David's father.