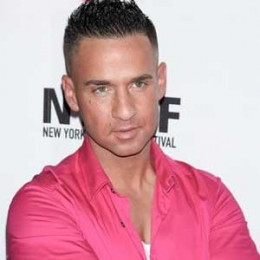 A television personality, Mike Sorrentino worked on the MTV reality show 'Jersey Shore' in six seasons from December 2009 to December 2012. In April 2017, he appeared on 'we tv's Marriage Boot Camp: Family Edition' with two brothers Marc and Maximo Sorrentino. He also worked as an assistant manager of a fitness center in Staten Island.

Michael Sorrentino also known as The Situation was born on 4th July 1982. He was born in West New Brighton, Staten Island, New York, and bought up in Manalapan Township, New Jersey.

Michael Sorrentino debuted in 2009 with the series 'Jersey Shore.' He also took part in 'Season 11 of Dancing with the Stars' and was eliminated on the 4th week with his dancing partner Karina Smirnoff.

In January 2011, he signed on to star in the 'YOBI.tv.' "Random Talent," a web series co-starring with Ben Green.

In March 2011 Sorrentino worked on the 'Comedy Central Roast of Donald Trump.' On 22nd February 2012, Sorrentino also worked in a small cameo role on 'ABC's Suburgatory.' He participated in Fox's dating game show entitled 'The Choice' in June 2012.

On 15th August 2012, he became a housemate on the tenth series of 'Celebrity Big Brother 'on Channel 5.

In 2015, he participated in the fifth season of 'Marriage Boot Camp: Reality Stars' with Lauren Pesce. Mike was a participant on the 9th season of 'Worst Cooks in America' in 2016.

The couple met and dated for nearly four years while they were in college. The couple is living a happy life and till now haven't made any plans to get married.

Sorrentino cracked his ribs at the gym in June 2015.

In 2010, he worked with Bristol Palin in a public service announcement for 'The Candie's Foundation.'In October 2012, he appeared in a PETA ad campaign promoting the spaying and neutering of pets.

On 17th June 2014, Mike Sorrentino was involved in a fight at a tanning salon in Middletown Township, New Jersey and was arrested for assault.

In September 2014, he was charged with tax fraud, allegedly avoiding paying taxes on $8.9 million.

Mike Sorrentino has a net worth of $300 thousand dollars. He earned working with bands including Devotion Vodka, Reebok Zigtech shoes. He also took out a workout DVD, a vitamin line for GNC, a clothing line. Sorrentino won $5 million in 2010, the second highest of any other reality star after Kim Kardashian.