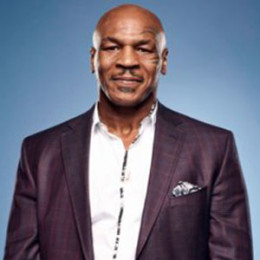 Mike Tyson is a 51-year-old former professional boxer who is known for his fearless attitude in the boxing ring and the second man to gain much popularity via sports after Muhammad Ali. He won the heavyweight championship at the age of 20 and became the youngest boxer to win a heavyweight title. He started boxing in 1985 and retired in 2005.

Born to Jimmy Kirkpatrick and Lorna Smith Tyson on June 30, 1966, Mike Tyson was raised in  Brownsville, Brooklyn, New York. His birth name is Michael Gerard Tyson. He is the youngest child of his parents. He had two siblings an elder brother, Rodney, and sister, Denise, sadly his sister passed away at the age of 24 due to a heart attack.

At the age of 10, his family shifted from Bedford-Stuyvesant to Brownsville. He attended Tryon School in Johnstown, New York. He spent most of his childhood in high-crime neighborhoods which influence his behavior. By the age of 13, he already had been arrested 38 times for knocking out grown men.

He was discovered and trained by Bobby Stewart and later he was introduced to Cus D'Amato. Tyson attended the Catskill High School by the day and practiced in the evening. He dropped out of school and started his career in boxing.

During the amateur phase, Mike Tyson won two gold medals subsequently in 1981 and 1982 at the Junior Olympic Games
In 1984, he fought against the Summer Olympics heavyweight gold medallist, Henry Tillman twice in the trials and both times he lost but it turned him into a professional boxer.

Tyson started his professional boxing career in 1985, in his first year, he won 26 fights out of 28. He fought against many veteran journeyman fighters and borderline contenders such as; James Tillis, David Jaco, Jesse Ferguson, Mitch Green, and Marvis Frazier.

The same year he lost his guide, philosopher and father figure man, D'Amato whose death shattered him from inside and outside. In 1986, Tyson debuted on TV fight against Jesse Ferguson and won the competition.

By 1988, he ranked the number one boxing player. He was involved with the gaming company Nintendo and released Mike Tyson's Punch-Out!! which sold more than a million copies.

Mike Tyson parted with his manager, Bill Cayton in 1988. The following year, he had only two matches, and he lost both fights. In 1990, Tyson lost to Buster Douglas in an undisputed championship. Tyson’s next game was against Evander Holyfield, the reigning champion at Caesars Palace in Las Vegas but he backed out due to his rib cartilage injury.

In 1991, when Tyson career seemed to get back on track he was arrested on rape charges, sentenced to six years followed by four years on probation but he was released in three years. During his period at the prison, he converted to Islam and changed his name to Malik Abdul Aziz.

After released from jail, Mike Tyson made a comeback in 1996, and he fought against Peter McNeeley, the fight was included in the 50 Greatest TV Sports Moments of All Time in 1998 by TV Guide.

In 2002, Tyson faced Lennox Lewis, the reigning champion who won  WBC, IBF, IBO and Lineal titles. He played a couple of matches but failed to defeat him. He fought against Kevin McBride on June 11, 2005, before his retirement announcement from boxing.

After his post-retirement, Tyson supported various endorsements and various boxing games in Las Vegas and promoted websites and companies. He also started a tour exhibition to pay off his debt.

In 2006, he again came under the knife for DUI and felony drug possession and was arrested for 24 hours followed by offered 360  hours of community service.

He also appeared in movies and television. He debuted in silver screen with the movie ‘The Hangover.' He was also the subject of an eponymous documentary made by the filmmaker James Toback. Tyson enrolled in theaters too with the stage show, ‘Mike Tyson: Undisputed Truth’ which showcased his personal and professional life.

In November 2013, Tyson, launched his book, Undisputed Truth, The New York Times Best Seller of that time. He started his own YouTube channel in collaboration with "Shots Studio" in 2017. In the same year, he published his second book, Iron Ambition.

Mike Tyson is happily married to Lakiha Spicer since June 6, 2009. He lives in  Seven Hills, Nevada along with his wife and children. The pair is proud parents of two children, daughter Milan and son Morocco.

Previously he married twice. In 1988 Tyson tied the knot with actress Robin Givens but due to his violent behavior towards his wife, the pair divorced in 1989. In a 1988 interview, Givens described her life with Tyson as,

"Torture, pure hell, worse than anything I could possibly imagine."

Seven years after the divorce, he wedlock with Monica Turner,  a pediatric resident at Georgetown University Medical Center but same as his first marriage this one also ended in 2003. They shared two children, Rayna and Amir.

Tyson altogether fathered seven children from his three marriages including his deceased daughter. In 2009, his four-year-old daughter was found dead by his 7-year-old son, Miguel.

Once, Mike was diagnosed with bipolar disorder and in 2010 interview with a talk show, The View he said,

Mike Tyson is one of the richest boxing players of all time with a total estimated net worth of $300 million, as per some online sources. He succeeded to earn an impressive sum of $400 million through his 20 years boxing career.

Tyson purchased a home at Seven Hills golf community whooping cost around $2.5 million. Likewise, he has three Bengal tigers pricing around £48,000 each.

Robin Givens is an American actress. She is famous for her work on the sitcom Head of the Class and other projects.

Monica Turner is a pediatric resident at Georgetown University Medical Center in Washington, D.C. She is the sibling of Michael Steele.

Lakiha Spicer is known as the wife of a former professional boxer, Mike Tyson. She shared two children with Tyson.

Amir Tyson is the first biological son of Mike Tyson and Monica Turner. There isn't much information revealed about Amir.

Rayna Tyson is the first biological daughter of Mike Tyson. There isn't much information revealed about Rayna.

Milan Tyson is the first daughter of Mike and Lakiha. She is very close to her dad and loves to spend time with him.

Morocco Tyson is the youngest child of Mike Tyson. He has one sister and two half-siblings.