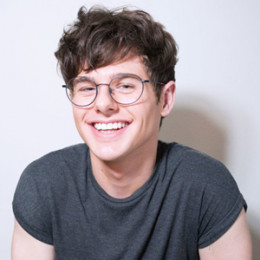 Mikey Murphy is one of the popular YouTuber stars and proclaimed average internet vlogger best known for his channel MikelsAverage which has accumulated over 1.4 million subscribers. He came to limelight after he created his own YouTube channel in 2013. He is committed to his girlfriend, Griffin Arnlund.

Mikey Murphey was born as Michael J. Murphy on 12th May 1998 to Michael and Monica in New Jersey, U.S. He grew up along with his younger sister Sydney. His father is an Occupational Therapist at a special school for kids whereas his mother is a nurse. Growing up, he learned Karate and is well trained in it.

Murphy began his career at the early age of 15: as he created his first YouTube channel, the Original Fiction TV along with his school friend, Liam. They created this channel to publish a project assignment. He loved his work as he knew photography and filming since the time he was a toddler.

Later he teamed with YouTuber, Luke Korn and produced lots of collaborated videos which collected him good attention for his now-main YouTube channel, MikelsAverage. His first video on his YouTube channel was What I Do When I Am Home Alone. By the 7th May 2013, he earned total 58 million channel views.

In his Draw My Life video, he began talking and walking before he was one-year-old which can be why he is mature enough to provide consistent and well-accepted content in his work. His most viewed video is People Telling Their Crush They Like Them which has over 2.7 million views since 6th June 2016 to 2017.

He wasn’t a professional when he began off with vlogging his everyday life with people online, but he now creates vividly creative videos making use of some innovative camera angles. He is also known for his work with consumer-based companies including M&Ms and BurgerKing.

In a short period, he has over 58 thousand fans following on Vine and 642 thousand followers on his Instagram account. As a tribute to their earlier days on YouTube, Luke Korn and Murphey have launched a compilation of their favorite songs on iTunes and the album is named From the Stories We Tell.

Now, he is represented by Creative Artists Agency and the digital management company BigFrame. Apart from his YouTube channel, he appeared in the role of Oliver in the comedy movie Dirty 30.

This charming boy, Mikey Murphy has won the heart of millions of fans, especially of the girls. He is in a relationship with Griffin Arnlund, since a long time.

The couple has shared several pictures together in past and even we can see his kissing photos with his girlfriend too. But it’s been quite a long period that the duo has not posted their photos in the social media. Looks like the couple wants to keep a low profile for now.

People might think that the couple is separated but it’s not so. They are still together in a relationship and going stronger.

Murphy has earned fame in a short span. Not only fame, he has received a good sum of net worth as well. He is active on social sites including Instagram, Youtube, and Twitter. He has accumulated over 1.4 million subscribers on his YouTube channel, 672k fans following on Instagram and 381k followers on his Twitter account. Looking his lavish lifestyle, he probably has an estimated net worth not less than seven figures.