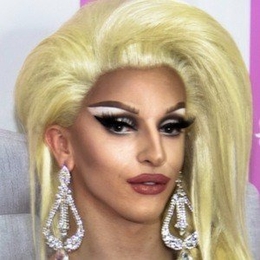 Miz Cracker has come along way with her career as a drag queen. She is, in fact, better known for her appearance on RuPaul's Drag Race.

The Seatle born, Miz Cracker whose real name is Maxwell Heller, is not married in the meantime, not yet. Heller who is Jewish only uses Miz Cracker as her stage name when she is in the disguise of a drag queen. 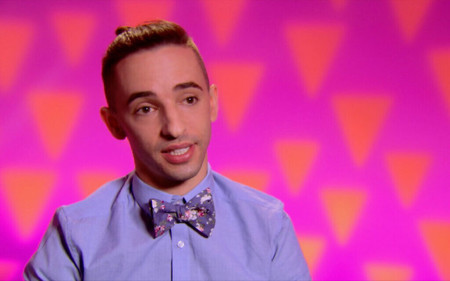 Cracker often discussed on the matter of her pronoun. Although she is often called 'she', Cracker is also sometimes termed 'he'. In her true self, Cracker previously said: "Out of respect if someone asks you to use a particular pronoun, that’s the one you go with unless it is a heterosexual male and they are in a position of privilege and power that I like to erode." 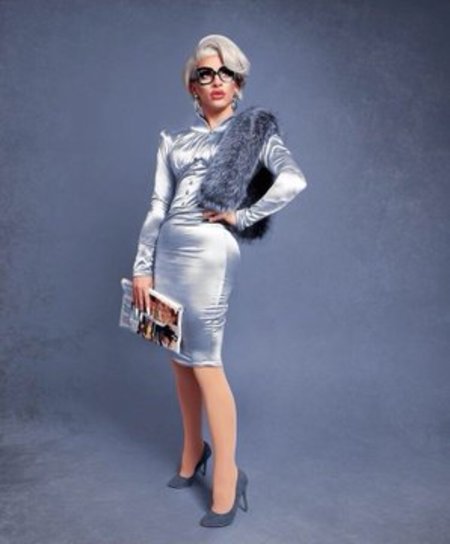 The New-York native who stands at a height of 5 feet 5 inches also once said: "I have no use for the male pronoun anymore. As many women have no use for men period." And, in September 2019, Miz tweeted: "Older millennials struggling with gender pronoun etiquette and wondering who Billie Eilish is ... keep trying. You will be a cool mom one day."

At the beginning of the second week of April 2018, Miz Cracker and her best friend, Katelyn May had their stuff stolen in Dublin. The pair was in Ireland for a show and were in fact on their way for the show. 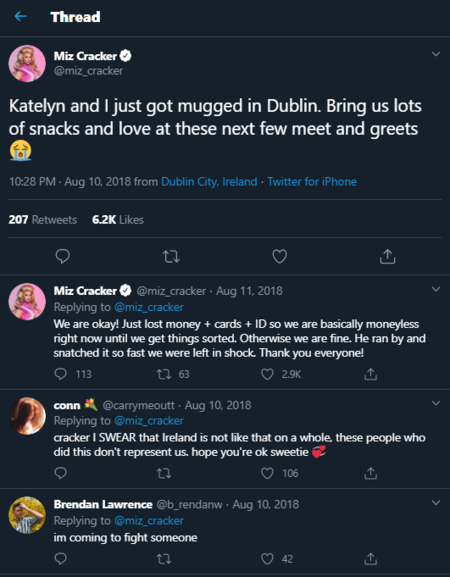 Miz Cracker tweeted she was mugged in Dublin in 2018. SOURCE: Twitter

According to Cracker, the robber walked by so fast and took away their purse that had their money, cards, and ID. The comedian shared the news on her Twitter account. Luckily, no physical harms were made at Miz and Katelyn.

Although Miz Cracker rose to fame after her participation on the tenth season of RuPaul's Drag Race where she was placed on the fifth position among the fourteenth contestants, she previously worked as a teacher in Senegal. Speaking of her Drag Race journey, she was assisted by season eight winner, Bob the Drag Queen.

And, throughout her stay on the show, she made some never before committed history. In fact, Miz is the first drag queen to last long before being eliminated on her first time on the lip-syncing battle. She did not win the show and the grand prize of $100,000, but she did earn $400 per episode.

Besides, Cracker also makes a few earning through her YouTube channel called Review with A Jew which is all about her analyzing RuPaul's Drag Race with humor and sarcasm. The reality show turned host also hosted another show of her called It's Time. 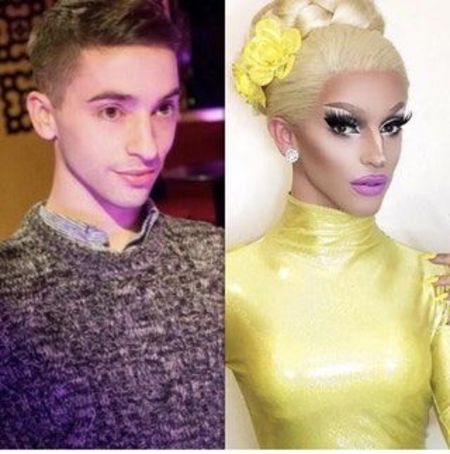 Not to mention, Cracker also runs her business, an online website that sells merchandise such as shirts, pins, and other accessories. Cracker can be estimated to hold a net worth of $100000.