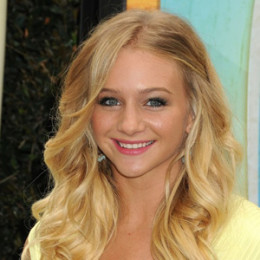 Mollee Gray is a contemporary dancer who won the hearts of audiences with a top 8 finish on 2008 of So You Think You Can Dance. She is also an actress known for Teen Beach Movie, Teen Beach 2 and The Reliant.

Gray was born on May 15, 1991, in Utah, USA to Martak Thursday and Sean Gray. She has a brother named Gage who is popular on Instagram. She holds American nationality and belongs to White American ethnicity.

At her young age, she went to The Dance Club in Orem, Utah.

Gray at her early age left her family and hometown of Utah to pursue her professional career. She first auditioned for the movie High School Musical at the age of 14, winning her first role as a featured dancer.

Further, she gave audition for High School 2 and became one of the leading dancers. She is a trained dancer in jazz, ballet, and tap which helped her in competing in the 6th season of So You Think You Can Dance where she finished up in the top eight. She even showed her talent in the movies like American Mall, No Strings Attached and Out of Step.  She was one of the dancers at the American Music Awards in the song, I Knew You Were Trouble by Taylor Swift.

The promising dancer also auditioned for the US version of The X Factor Season 3 with a group called Drama Drama but was not selected for the next round. In the year 2011, she released her first music video entitled You Do Not Know Anything About Me. The song was written and produced by Jim Wirt. She also released her single Wasted on iTunes.

Apart from dancing, Gray has pursued her career in the field of acting. She has featured in many television series including Big Time Rush, Drop Dead Diva and Victorious, Suburgatory, Austin & Ally and Shake It Up.

Gray is openly lesbian. She is married to her fellow dancer Jeka Jane. They started dating in 2013, and after three years of relationship, the couple engaged in April 2016. Jane proposed the love of her life when she rented out the entire Republic of Pies restaurant in North Hollywood.

We decided not to dress up this year.

Finally, the couple married in September 2017 and their wedding day marked the duo’s four year anniversary. The wedding was held at South Lake Tahoe, California. The couple shares their journey together as a couple on their YouTube channel.

She recently shared a picture with her brother wishing him on his birthday. Gray and her husband Jeka doesn't share any children as of yet.

Mollee Gray is living a lavish life with her partner Jane. Her net worth has not been revealed, but as she is involved in numerous movies and series, it is reported to be in a million.

The famous dancer married her longtime girlfriend Jeka Jane in September 2017. They dated each other since 2013.