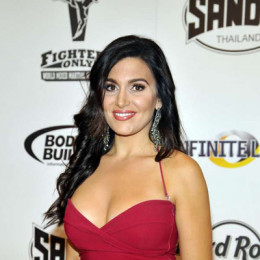 She is a highly appreciated and a very talented American Sportscaster working for the NFL. She currently hosts the shows like NFL AM and NFL Fantasy Live in the Network. She had graduated in Bachelor of Arts in communications and a minor in business administration from the University of Connecticut. She is widely regarded as female pioneer for covering UFC with ESPN, Versus (now NBCSN) and FS1. She is also a United Way Ambassador.

The relationship status of Molly; she is currently dating boyfriend Jalen Rose. Before that, she has never been married and has no children. However, some rumors on her secretly marriage and pregnancy is seen but seems airy. She has remained discreet and has maintained privacy regarding her personal life. She does not like to be pulled in gossip and rumors thus avoids talking about her personal life in public.

She is half Albanian and half Italian. Mostly, she is recognized as the sports anchor and moderator of ESPN.

She completed her graduation in Bachelor of Arts in communications and a minor in business administration from the University of Connecticut.

Later she joined the Quinnipiac University and completed her master degree from broadcast journalism.

Molly started her anchoring career from CBS Sports Network, where she covered the college football and NCAA Tournament.

After joining the ESPN, her career takes a new height of success. In 2008, she served as the interactive host for College Football Live on ESPN and ESPN2.

She was honored with an Emmy Awards because of her reporting for Fantasy Football Now on ESPN2.

She has done numerous interviews with various athletes and celebrities over her time on ESPN as well as she has covered a multiple of Super Bowls.

Moving towards her personal life, she is in a happy relationship with her boyfriend Jalen Rose who is a former NBA player.

The duo started dating one another since July 2016. Often, the duo posted their romantic pictures on social sites which reflect their love for one another.

Rose has three children; two daughters, Mariah and Gracie and son, LaDarius but he never mentioned the mother of his kids. However, it is believed he gets married for twice.

It's been nearly one year of their relationship and still, they want to know more about each other that's why they didn't want to think about getting married.

The 33 years old, Molly has an impressive net worth just like her career. She has succeeded to earn 3 million dollars of net worth.