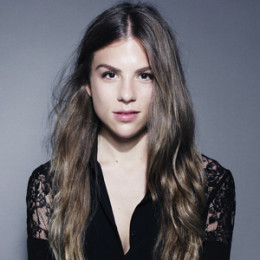 French actress and model, Morgane Polanski is best known for playing as Princess Gisla on a historical drama television series, Vikings. She has appeared in the number of movies like The Pianist, The Ghost Writer, Oliver Twist, and Unhallowed Ground. Her movie, The Pianist was nominated for Academy Award for Best Picture.

Morgane Polanski was born on January 20, 1993, in Paris, France. She belongs to Caucasian/race-ethnicity and holds French nationality.

Polanski is born to French-Polish filmmaker Roman Polanski and French actress Emmanuelle Seigner. She has a younger brother, Elvis Polanski.

Polanski went to the International School of Paris. She then enrolled at the Drama Centre London and Central School of Speech and Drama; graduated in 2014.

Morgane Polanski made her acting debut in the 2002 biographical drama film, ‘The Pianist’. The movie was directed by her father Roman Polanski. The movie was nominated for the Academy Award for Best Picture.

In 2005, Polanski appeared as a farmer's daughter in the drama film ‘Oliver Twist.’ She also portrayed a hotel receptionist in the political thriller movie, ‘The Ghost Writer’.

In 2010, Polanski was cast as Hotel receptionist in Franco-German-British political thriller film, The Ghost Writer, starring, Ewan McGregor, Pierce Brosnan, Kim Cattrall and so on.

After that, Polanski featured in the British independent horror flick, ‘Unhallowed Ground’ as Sophie Dunant. The same year, she joined the cast of the historical drama TV series ‘Vikings’ as Princess Gisla.

Currently, Polanski is busy for her upcoming movie, The Aspern Papers.

Morgane Polanski is reportedly single and has no any records of her past relationship. There were rumors of her dating someone but she hasn’t disclosed her relationship to the media. She is active on Instagram and posted several pictures with her friends on her Instagram account.

Polanski has earned the popularity through her significant performances in her career. She has kept her personal life low profile, despite the popularity.

Morgane Polanski has made a tremendous amount of money from her successful career. According to the online site, networthpost, she has the net worth of $1 million.

Polanski’s movie, The Pianist was made with the budget of $35 million. The movie was a big hit grossing a tremendous amount of $120.1 million at the box office.