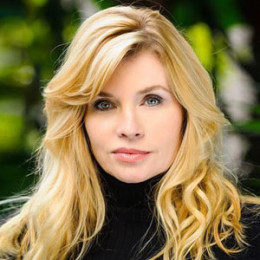 Nadine Caridi is a British actress and model better known for Millet Lite Beer commercials. She is also known as the Duchess of Bay Ridge and the former wife of Jordan Belfort. Her husband named a yacht after her, The Nadine. Currently, she is married to John Macaluso.

Nadine Caridi was born on 6th November 1962, London, the United Kingdom to British parents. She belongs to white ethnicity.

Though she was born in the city of London, she spent most of her time in Bay Ridge, New York. There she attended John Dewey High School and completed her master degree in Canceling Psychology from Pacifica Graduate Institute and earned a Ph.D. in 2015.

She began her career from the Miller Lite Beer commercials and became the image for Miller Lite during 1990s. She established herself as one of the renowned personality of entertainment industry after she made her appearance in commercials including Monday Night Football commercials.

Talking about Nadine’s personal life, she has been married twice in her life time. She married Jordan Belfort in the Caribbean, in 1991. The couple first met at the party and the time Jordan was still married to Denise Lombardo. Their affair led to a divorce between Jordan and Denise.

Jordan a.k.a The Wolf and Nadine had two children: son, Carter Belfort and a daughter, Chandler Belford. The pair ended their relationship in 2005 after she claimed of domestic violence fueled by Belfort’s problem with drug addiction and affairs with other women.

Later, she married John Macaluso, a big business tycoon, after dating for several years. The husband and wife currently live in Bakersfield, California with John’s three daughters from his previous wife including Nadine's son and daughter.

Nadine’s source of income includes acting and some commercials. Looking at her lavish lifestyle, she along with her current husband, John probably enjoys their joint net worth of millions. She lives in a lavish house in Bakersfield, California.

Jordan Belfort is the first husband of Nadine Caridi. He is an American author, motivational speaker, and former stockbroker. He has published the memoir, The Wolf of Wall Streer and later the memoir was adapted into a movie which was one of the blockbuster movies released in 2013.

After divorce with Jordan Belfort, Nadine Caridi dated John Macaluso and married him. He is a business tycoon and well-known American actor known for The Wanderers.

Carter Belfort is the one only son of Nadine Caridi and Jordan Belfort.

Chandler Belfort is one only daughter of Nadine Cardidi and Jordan Belfort.