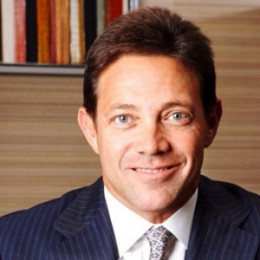 Jordan Ross Belfort, better known as Jordan Belfort, is an American motivational speaker. He is also an author and former stockbroker. He came to limelight after pleading guilty to fraud and related crimes in connection with stock-market manipulation, money laundry and running a boiler room as a part of a penny-stock scam. He has published the memoir, The Wolf of Wall Street, which later was adopted into the movie. He has married twice, and both ended in a divorce. Well, it is said third time is a charm, and he has proven it as he has finally found love. Jordan is leading a happy life with his fiance Anne Koppe.

Jordan was born on 9th July 1962, Queens, New York City, U.S. to Leah and Max Belfort to a Jewish family. Both his parents were accountants. He completed his degree in biology from American University.

Once he and his childhood friend, Elliot Loewenstern received $20,000 selling Italian ice from Styrofoam coolers to people at a local beach. He decided to use the money earned with Loewenstern to pay for dental school and applied at the University of Maryland School of Dentistry but left after the dean said,"The golden age of dentistry is over. If you’re here simply because you’re looking to make a lot of money, you’re in the wrong place", on his first day of college.

Belfort started his career as a door-to-door meat and seafood salesman on Long Island, New York where he enlarged the meat-selling business to employ several workers. Somehow, the business failed and filed for bankruptcy at 25. Then he worked as a trainee stockbroker at L.F. Rothschild with the help of family friends. There he was laid off after the firm experienced financial difficulties related to Black money stock market crash during 1987.

Then he started his own investment company, Stratton Oakmont and functioned as a boiler room that marketed penny stocks and defrauded investors with pump and dump type of stock sales. He developed a lifestyle that consisted of lavish parties and intensive recreational use of drugs like methaqualone and sold in a brand name Quaalude which resulted in addiction.

He also employed over thousand stocks brokers and involved them in stock issues totaling more than U.S. $1 billion. Law enforcement officials targeted the firm, and its notoriety inspired the movie Boiler Room in 2000 and the 2013 biopic The Wolf of Wall Street.

Later, the National Association of Securities Dealers started taking disciplinary actions against Stratton Oakmont in 1989 and peaked in its permanent shutdown in 1996. Then he was indicted for Security fraud and money laundering as well.

Also, he was asked by the court to pay back an amount of $110.4 million that he had cheated from the several of the stock brokers. During his time in prison, he shared the same cell with Tommy Chang with whom he remained a close friend even after they were released. Chang motivated him to pen down his past experiences as a stockbroker and rose as a motivational writer and speaker.

Soon, he was widely acknowledged as one of the finest motivational speakers with several live seminars in Australia which was appreciated by audiences. Soon he undertook on a live world tour in 2015 lecturing on motivational topics. Now, he is a consultant to over 50 public companies and is known for his writing in different magazines and newspaper throughout the world.

In 2008, he published the memoirs, The Wolf of Wall Street which became one of the international bestselling memoirs which published in approximately 40 countries and translated into 18 languages.  The memoir was later adapted as a movie of the same name by Martin Scorsese which starred Leonardo DiCaprio and Jonah Hill. Apart from this, he has released another memoir in 2009 called Catching the Wolf of Wall Street that explored his life after he was arrested.

Talking about Jordan’s personal life, he married Denise Lombardo in 1985. The husband and wife did not have any children and divorced in 1991 after living nearly for five years of their marriage.

Soon after the divorce from Denise, he married Nadine Caridi in the same year. He even had an affair with her during his first marriage which is one of the reasons for the divorce. Their relationship began after the pair first met each other at a party. Their marriage resulted in the birth of two children: daughter, Candler Belfort and a son, Carter Belfort.

Unfortunately, his second marital relationship with Cardid did not last long and the pair divorced in 2005. The reason behind their divorce was that Cardidi claimed of domestic violence fueled by his problems with drug addiction and affairs with another woman.

He got engaged to his longtime girlfriend Anne Koppe in 2015. The lovebirds are living a happy life.

According to the sources, Jordan has successfully earned an estimated net worth of $100 million which he earned from his career in publishing book and from his motivational speaking with the tours of live seminars in Australia. Also, he received a $500, 000 advance from Random House before the release of the movie, The Wolf of Wall Street.

Denise Lombardo is the first wife of Jordan Belfort to whom he is married in 1985. The husband and wife did not have any children.

Jordan married Nadine Caridi, a British actress, and model in 1991. She has done several commercials including the famous Monday Night Football in the 1990s.

Chandler Belfort is the elder daughter of Jordan Belfort and Nadine Caridi.

Carter Belfort is the younger son of Jordan Belfort and Nadine Caridi.