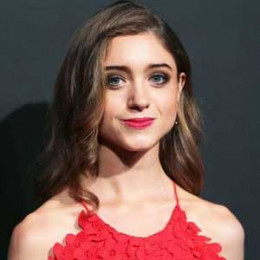 An actress, Natalia Dyer, is well known for her role as Nancy Wheeler in the Netflix science fiction drama series 'Stranger Things.'She is best known for her movie I Believe in Unicorns (2014), Hannah Montana: The Movie (2009) and Stranger Things (2016). Apart from filmography, she is a model and a writer. She recently published a book titled “A Brush with Life.” In 2012, she starred in 'Blue like Jazz' as Grace.

Natalia was born on 13th January 1997. She studied at the Gallatin School of Individualized Study. Dyer has been acting since she was twelve years old. Her first film role was as Clarissa Granger in Hannah Montana: The Movie (2009).

Her first major film role was in 'The Greening of Whitney Brown' (2011) as supporting character, Lily for which she got a lot of praise.

Also, see the biography of; Elaine Cassidy and Elizabeth MacDonald

Dyer has also appeared in short films, and she co-starred alongside Brooke Shields and Aidan Quinn in the 2011 movie 'The Greening of Whitney Brown.'

In 2016, Dyer worked as Nancy Wheeler in Season 1 of the Netflix web series 'Stranger Things.' She was nominated for a Screen Actors Guild Award in 2017 for Outstanding Performance by an Ensemble in a Drama Series for Stranger Things.

Natalia Dyer and her co-star Charlie Heaton are reportedly all loved up outside of their Netflix show. The pair were spotted at the MTV Movie and TV Awards holding hands.

The pair first sparked rumors of an affair in September 2016, and now they are officially a couple.