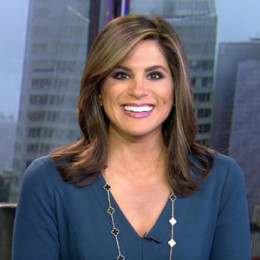 Natalie Pasquarella is one of the talented American anchor and reporter. She is famous for anchoring and reporting the News 4 New York. She also worked as an evening anchor and reporter at WSOC-TV for several years. She was honored by The West Virginia Association Press on Sex offenders voting in Public School. She recently welcomed a newly born baby, Jamin Kames Pastore, with her husband, Jamin Pastore.

Natalie Pasquarella was born on 25th January 1982 in Seville, Ohio, U.S. She grew up along with four other siblings and is the eldest among the others. She holds the citizenship of America and belongs to white ethnicity.

When she was a child, she wanted to pursue her career either as a police officer or a Broadway actress. She always wanted to work at the Walt Disney World and even got a job as an intern, but she gave up her dream job to become a reporter.

She attended Kent State University and completed her degree in journalism. After that, she interned at NY1 News in New York City.

Pasquarella began her career as a reporter in her hometown. She started working as a news anchor, reporter, and producer at WTOV-TV, since December 2004. She worked there for nearly three years.

Then she joined WSCO-TV, Charlotte, North Carolina in July 2008. There she co-anchored for the weekday newscasts and served in the network for nearly seven years. She also produced multiple in-depth investigative stories on the increase rate of human trafficking and the use of black-tar heroin.

For her hard work and struggle, she was honored by The West Virginia Association Press on sex offenders voting in Public School.

One of her great achievement was when she traveled to Washington, D.C. in 2011 to take an interview with President Barak Obama on local international trade issues. The following year, she also co-anchored live political coverage of the Democratic National Conventional held in Charlotte, North Carolina.

Pasquarella married her boyfriend, Jamin Pastore. The couple was in a love relationship since their high school. After dating several years, the girlfriend-boyfriend exchanged vows on 25th May 2014 with the involvement of some family members and close friends.

She has posted several pictures of her wedding ceremony on her social accounts. After three years of their marital relationship, Pasquarella announced her pregnancy on her Twitter account.

The husband and wife welcomed their first child, a baby boy, Jamin James Pastore, on 26th September 2017, after her water broke live, on-air during News 4 New York at 11. Now, the family lives in the bungalow situated in Ohio.

Pasquarella is one of the top news anchors who is paid a good amount of salary. As per the sources, her monthly salary is around $25,000 to $49,000. Looking at her salary, she might have a net worth not less than seven figures.

Natalie Pasquarella is in a marital relationship with Jamin Pastore, since 2014. The couple were together since their school days and is still together. They have celebrated their third wedding anniversary and has welcomed their first child.