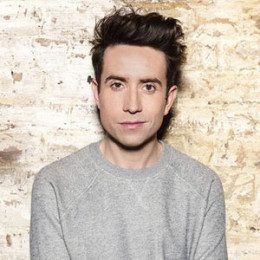 Nick Peter Andrew Grimshaw, better known as Nick Grimshaw, is a British television and radio personality. He is best known for hosting Radio 1 Breakfast Show, judging the twelfth series of The X Factor and hosting a one-off panel show That Music Show on Channel 4. He also hosts various programs on BBC Radio 1.

Nick Grimshaw was born on 14th August 1984 Manchester, England and grew up in the city of Oldham. He is the son of Peter Grimshaw and Eileen Grimshaw and belongs to white ethnicity. He is a sibling brother of Andy Grimshaw and Jane Grimshaw.

He attended the University of Liverpool to earn the degree in Communication and Media Studies but unfortunately, he failed to do so and graduated with a degree of DipHe. During his college days, he was the member of the University’s student radio station, ICON Radio.

Nick started his career as a radio presenter and joined Radio 1 in September 2007, presenting the BBC’s youth stand Switch along with fellow DJ Annie Mac. He worked there for 9 months.

From October 2008 to May 2009, he hosted BBC Radio 1’s Weekend Breakfast Show. He managed in such a way that the show reached number 369 before he left for The Breakfast Show.

He rose to the fame from the show, The Radio 1 Breakfast Show, after replacing Chris Moyles as a host, on 11th July 2012. His radio shows were one of the most popular shows loved by every young listener.

According to the record in February 2014, The Breakfast Show recorded an enhancement of more than 700,000 listeners, which set the average number of listeners per week to 6.3 million.

He again came in the highlights after he refused to promote Rihanna’s latest album because she canceled an interview with him.

He has not only hosted but also acted as a judge in different shows. His first TV debut was with UK entertainment channel E4, as a host of the show. He also got a chance to host the daily breakfast show Freshly Squeezed with Alexa Chung and Jameela Jamil, airing 7 am on weekdays.

Moreover, he has judged the twelfth series of The X Factor and Column Idol 2014 and has worked in Disney movie, Wreck-It Raphh along with stars Sarah Silverman, John C. Reilly, Jane Lynch, Jack McBrayer, Rich Moore, Alan Tudyk, Mindy Kaling and others. Not only this, he appeared in many soap opera including Coronation Street, Home and Away and Hollyoaks.

Nick was secretly dating a fashion director, Nicco Torrelli since 2013. The pair were spotted by the media at the Glastonbury festival wearing same kind Hunter Wellington boots.

After dating nearly a year, they split because of some unknown reasons. Currently, he is single and not dating any one after break up with his first boyfriend.