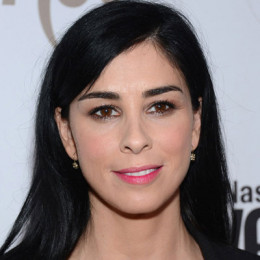 Popular as an American stand up comedian, Sarah Silverman is also a writer, producer and an actress. She performs the satirical comedy towards the social taboos and controversial topics like sexism, racism, religion, etc. She started her journey in comedy after reaching the age of 17. Born as the youngest of the five children of her parents Beth Ann and Donald Silverman, She had attended New York University but never been graduated from there.

She has a brother named Jeffrey Michael Silverman and three sisters Jodyne L. Speyer, Susan Silverman, and Laura Silverman. Her ancestors were from Russia and Poland.

After completing graduation from The Derryfield School in Manchester, she joined New York University but didn't graduate.

Silverman was an occasional performer on Saturday Night Live. She starred and produced The Sarah Silverman Program from 2007-2010. In 2010, she released her autobiography The Bedwetter.

She played supporting roles in movies like School of Rock, Overnight Delivery, Screwed, Heartbreakers, Evolution, School for Scoundrels, Rent, and The Way of the Gun.

She released a concert movie, Sarah Silverman: Jesus Is Magic in 2005 that earned $1.3 million the box office. She performed alongside Michelle Williams and Seth Rogen in Take This Waltz.

She won two Primetime Emmy Awards for her work and dedication on television. Her comedy works are basically focused on controversial topics like religion, racism, sexism, and politics.

During an interview with The Daily Beast podcast The Last Laugh, she stated that she had to pay $1,500 for her hair and makeup while attending 2018 Emmy Awards in support of her Hili talk show 'I Love You America'. The show was nominated for Outstanding Variety Sketch Series.

Earlier 2019, Hulu announced that it would cancel the show after two seasons. She couldn't believe the cancellation of the show as she was expecting the show to be renewed for a third season.

Silverman was previously in a relationship with comedian and fellow SNL writer Dave Attell.

She was in a relationship with an actor Michael Sheen. She has never been married and has no children. However, some rumors on her secretly engaged, break up and pregnancy is seen but seems airy. They ended four years of their relationship and confirmed the news via Twitter post.

In July 2016, she spent days in the intensive care unit at Cedars Sinai Hospital with epiglottitis.