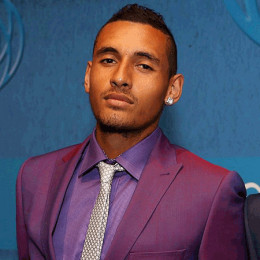 Nicholas Hilmy Kyrgios commonly known as "Nick Kyrgios" is an Australian tennis player. He has signed several endorsement deals such as, Bonds, Nike,Yonex, Beats and Malaysia Airlines. At the 2013 Australian Open, he won the boys' singles event and the boys' doubles event at the 2013 Wimbledon Championships. He was born to Giorgos, a house painter and Norlaila, a computer engineer. His father is a Greek and Mother is Malaysian.

Talking about his sexuality, he definitely is not gay. Till now he hasn't married anyone and also does not have any kids. There is no any exact details about his affairs, as he has managed to keep his personal information within himself. He is currently single. He became a part of a controversy when he commented on something very bad about a woman named Donna Vekic and was fined �4,700 for the comments.

Updated: Nick dated fellow tennis champ Ajla Tomljanovic in 2015 till they broke up in 2017.