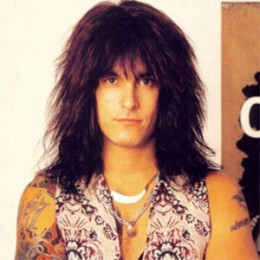 An American musician, songwriter, Nikki Sixx is a son of Deana Richards. Sixx and Grey are the founders of the group named'London soon afterward', in 1978. In 2000, a number of the London demos recorded with Sixx were included on London Daze by 'Spiders & Snakes', led by former London guitarist Lizzie Grey. In 1981, Sixx founded 'Mötley Crüe' with drummer Tommy Lee. Sixx formed the group 'Sixx: A.M.' in 2006, to record an audio accompaniment to his autobiography entitled 'The Heroin Diaries: A Year in the Life of a Shattered Rock Star'.

Nicky Sixx was born on 11 December 1958 in San Jose, California. He belongs to Italian ancestry.

His sister Lisa Marie Feranna was born with Down Syndrome.

Sixx is best recognized as the bassist, co-founder, and primary songwriter of the band Motley Crue.

He worked with Dave Darling and Steve Gibb and formed side project group 58 and released an album named Diet for a New America.

Sixx's net worth is estimated to be around $45 million.

One month after divorcing Brandt in November 1996, he married his second wife, another Playboy Playmate, actress Donna D'Errico. They have one daughter named Frankie-Jean Mary Sixx (2001).

Also, he dated Courtney Bingham and married on 15 March 2014.

Nikki Sixx was previously married with Brandi Brandt, a model, and actress, who posed for Playboy's Playmate of the Month for October 1987.

He married with Donna D'Errico, an actress, and model posed for Playboy magazine as its Playmate of the Month for September 1995.

His son Gunner Nicholas Sixx was born on 25th January 1991.

His daughter named Frankie-Jean Sixx was born on 2nd January 2001.