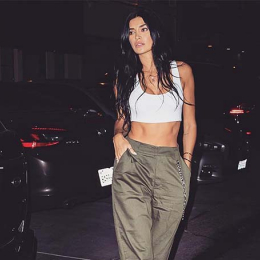 Canadian Model, Nicole Williams stole the hearts of many followers with her stunning physics and gorgeous face. The 31-years-old model is famous for her modeling skills and has represented many International and national modeling organizations like Los Angeles Models, Major Models New York, Muse Management South Africa and many more. She is also popular for being the wife of famous American professional football player Larry English.

Personal Life of Nicole Williams-English; Is she married?

Nicole Williams-English is presently married to her long term boyfriend turned husband Larry English. Larry is a former American professional football player. Moreover, the duo shares a good bond and is going to celebrate their two years of marriage anniversary this coming May.

Famous Canadian model Nicole Williams and her spouse Larry English in an event.

The pair first met in the year 2010 and eventually after that they started dating. After getting the vibes of true love between them, they decided to share the wedding vows on 19th May of 2017. The wedding was attended by many well-known Hollywood personalities and definitely was the best day of life for the couple.

Canadian model Nicole Williams English and her husband Larry English at their wedding.

What's more, Larry proposed Nicole by getting down to his knee in the season two finale of WAGS. In fact, he even designed their engagement ring by spending a lot of hours. Furthermore, the engagement ring was made of an 18-karat rose golds setting with a 5.14-carat oval center stone surrounded by a diamond band consisting of over 100 round stones with a total weight of almost 6 carats.

The couple does not share any children as of now, however, there will be no wonder if they soon became parents. Williams in an interview was asked about her thoughts and plans for having a baby where she answered;

"I'm still focusing on work and Larry and I still do a lot of traveling. But we definitely want children in the future. We've been talking about it so we can plan it out the right way. I know it's never a perfect time, but the time right now in the middle of everything I'm doing is probably not the best time so we'll give it another two years, at least."

The WAGS actress is out of any rumors and controversies regarding her personal as well as her professional life. More to that, she is currently living a happy life with her spouse, despite feeling some highs and lows in the mid-years of their relationships. Besides, the relationship between the duo seems fluid as there is no sign of rumors between them.

What is the Net Worth of Nicole Williams-English?

Nicole Williams-English holds an estimated net worth of $1 million, she helped herself to garner that wealth by working in various modeling and acting campaigns. In addition, the average salary of a model is $42,900 per year, besides, it depends upon the number of projects a model does in a year. Similarly, the average salary of a television actress is $9-$100 per hour which varies upon the popularity of the model and the show.

And somehow in this crazy life... we found each other photo by @saraloblaphotographer

The 31-year-old model made quite a good name for her stunning physic and modeling skills. In fact, she worked as a representer for famous brands like Los Angeles Models, Major Models New York, Muse Management South Africa, Next Toronto, FM London, and Wilhelmina New York. Further, she also got a chance to work with a famous American singer and Hollywood personality Robin Thick.

As for English's acting career, she regularly features in an American reality documentary television series named WAGS. More to that, she has appeared in all the three seasons of the television show and if the television series extends the further season, she will again appear on the series. She starred along with stars like Natalie Halcro, Barbie Blank, Olivia Pierson and many more.

Nicole Williams-English is presently married to her long term boyfriend turned husband Larry English. Moreover, the duo shares a good bond and is going to celebrate their two years of marriage anniversary this coming May.