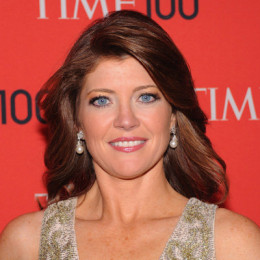 Norah Morahan O’Donnell is a television journalist, who works as the co-anchor of CBS This Morning. Her father name is Francis O'Donnell, a doctor. She attended Douglas MacArthur High School and holds a Bachelor of Arts in philosophy and a master's degree in liberal studies from Georgetown University. She has been able to make herself stand in the position of one of Washington’s 100 most powerful women.

Norah O'Donnell was born Norah Morahan O'Donnell on January 23, 1974, in Washington, D.C., U.S. She is the daughter of Francis O'Donnell, a doctor. She is American and belongs to the Irish descent.

O'Donnell graduated from Douglas MacArthur High School. She earned her Bachelor of Arts in philosophy. Then she completed her master's degree in liberal studies from Georgetown University.

Norah O'Donnell started her career as a staff writer for Roll Call where she covered Congress. She was the commentator of the Today Show, Chief Washington Correspondent for MSNBC. Later, she served as the White House correspondent for NBC News and worked as contributor anchor for MSNBC Live.

O'Donnell also worked as host of Hardball with Chris Matthews and was a regular pundit for The Chris Matthews Show. Since 2007, she also co-hosted the New York City St. Patrick's Day Parade on WNBC.

In 2012, O'Donnell replaces Erica Hill and became a co-anchor on CBS This Morning.

Norah O'Donnell is married to restaurateur Geoff Tracy (owner of D.C. restaurant Chef Geoff's) in June 2001. In addition, the couple welcomed their twins children, Grace Tracy, and Henry Tracy on May 20, 2007. After a year, they welcomed their third child, daughter Riley Norah Tracy, was born on July 5, 2008.

He owns several restaurants in the Washington D.C area, including his namesake Chef Geoff's, owner of D.C. restaurant.

He is a cute, disciplined and adorable boy who was born safe, sound and healthy.

She is beautiful like her mother and is the twin sister of Henry.

She is a cute daughter from her romantic and perfectly matching parents.