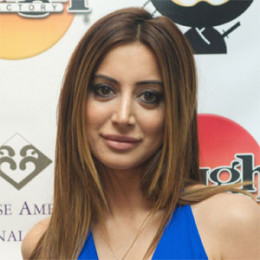 American actress, Noureen DeWulf is better known for her portrayal of Lacey in an American television sitcom, Anger Management (2012-2014). She has also starred in the movies including Americanizing Shelley, Ghosts of Girlfriends Past, Zambezia and many more. On 3rd September 2011, DeWulf married hockey player Ryan Miller and had a son, Bodhi Ryan Miller. Previously, she also married to James DeWulf. DeWulf also ranked as one of Maxim's Hot 100 beauties.

Noureen DeWulf was born as Noureen Ahmed on 28th February 1984 in New York City, New York, U.S. She belongs to White-American race/ethnicity and holds an American nationality. She is fluent in English, Hindi, Urdu, as well as Gujarati.

DeWulf is born to Indian Muslim parents from Pune, India and grew up in Stone Mountain, Georgia. Her parents didn't allow her to take drama courses in high school.

However, DeWulf was finally able to pursue acting at the Boston University's College of Fine Arts and also performed with an Atlanta theater company during summer breaks.

After completing graduation, Noureen DeWulf made her acting debut with a comedy/musical short film, West Bank Story, in 2005. The movie also won an Academy Award.

DeWulf won the Best Actress at Comedy Ninja Film and Screenplay Festival for her role as Temp in the movie Coffee, Kill Boss, in 2014.

In the same year, for the second time, DeWulf was ranked #93 most desirable women in Maxim magazine's "Hot 100." Till date, she is active in the field of acting and has featured in some popular series including, Welcome to The Captain, The Hard Times of RJ Berger, Over the Garden Wall and few more.

Noureen DeWulf married twice in her life. She first married James DeWulf in 2000 and went through a tragic divorce after ten years of their marital relationship in 2010.

After that, DeWulf tied the knot with an American professional ice hockey goaltender, Ryan Miller on September 3, 2011.

The couple is blessed with a son Bodhi Ryan Miller and they are living happily. It’s been more than six years since they tied their knot and so far the duo shows no sign of divorce or separation.

Noureen DeWulf appeared in multiple movies as well as a TV series and has earned a decent amount of money from her acting career. As of December, her estimated net worth is reported to be around $3 million.

DeWulf’s movie, Ghosts of Girlfriends Past made a box office collection $102.2 million and is rated 5.8 out of 10  by IMDb whereas her other works like The Goods: Live Hard, Sell Hard succeeded to earn $15.3 million. Moreover, DeWulf’s husband Ryan Miller has the estimated net worth of $14 million.