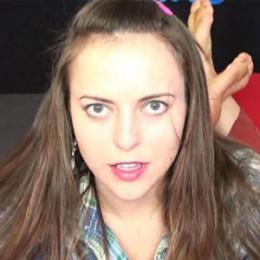 Youtube is considered as one of the best platforms to showcase one's talent and to gain fame. Among all the YouTubers, Olga Kay grabbed a quite popularity through her youtube channel. Moreover, Starting from 2016  Kay created shows like Emo Girl and Olga Kay's Show on her channel.

Olga Kay's Personal Life; Is she dating a Boyfriend?

Olga Kay is currently out of any relationship. She is possibly single and is free of rumors and controversies. The Internet star seems career oriented as she doesn't look to have any boyfriend.

The Youtube star is an active person in social media and uses Instagram, Twiter, and Youtube as a professional platform. She often posts her daily life activities and funny videos for her followers.

Olga worked in diverse sectors in her career as an actress, comedian, director, and performer. She might hold an estimated net worth of somewhere $100,000 ballpark.

Dear #MommyBloggers , Have you discovered @CampStores yet? So so awesome #ToyFair2019

Soon she began her third YouTube channel named OlgaKayGames which has over 110k+ subscribers. She managed to earn $1-$17 monthly and $13-$200 yearly from the channel.

Olga worked with the various brand like Microsoft, Ford, Google, Axe, Virgin Mobile, Xbox and many more. She has gathered a good amount of money throughout promoting those brands.

Olga Kay was born on 20 November 1982 in, Ukrainian SSR, the Soviet Union with Scorpio zodiac sign. She is private about the information about her parents and siblings. Furthermore, her educational qualifications are yet to be discovered.

Olga Kay snapped with the Mooshwalks filter of the Snapchat app while exploring in the AnimeExpo2016 event.

At an early age, Kay started her training to become a professional circus juggler and later she joined Ringing Brothers Circus. Then she began to make videos of her acting on her youtube channel. She later moved to Los Angeles where she started working on tv shows and numerous youtube events.

Additionally, Kay started her career in a slow manner but after moving to LA she caught the limelight and grabbed every opportunity. As of now, she serves as a sucessful YouTuber.