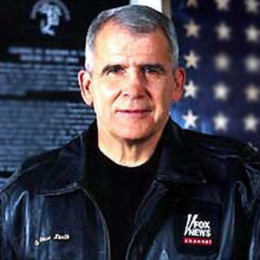 Oliver Laurence North is an American television host, political commentator, and a military historian. He was the best-selling author and former U.S. Marine Corps lieutenant colonel. Oliver was also known as the National Security Council staff member during the Iran-Contra affair, a political scandal of the late 1980s. He is also a host for documentary War Stories With Oliver North on Fox News Channel.

He was raised in Philmont and attended Ockawamick Central high school.He later joined the State University of New York at Brockport for two years. He also enrolled at the US Marine Corps Platoon Leaders Class during summer, held at the Marine Corps Base Quantico in Virginia.

Laurence was trained at the United States Naval Academy in Annapolis in 1963. During, the Vietnam War in 1968, he served as a Platoon Commander during his combat service. In the year 1971, he served as the commanding officer of the U.S. Marine Corps ’Northern Training Area in Okinawa Prefecture, Japan.

Oliver was assigned for four years in Marine Corps Headquarter in Arlington, Virgina. He worked for two years as the Operations Officer in the 3rd Battalion, 8th Marine Regiment commanded by Lt. Col John Southy Grinalds, 2nd Marine Division in Camp Lejeune at Jacksonville, North Carolina. He was appointed a deputy director of the National Security Council by major President Reagan.

In the year 1980, he served political-military affairs to the National Security Council in Washington, D.C. as the deputy director. He was the host of his own show on Radio America known as the Oliver North radio show or Common Sense Radio. After his retirement from Marine Corps, Oliver served as the host of TV show War Stories with Oliver North and appeared as a regular commentator on Hannity. He worked as a co- host for MSNBC Show Equal Time(1999)alongside Paul Begala.

North is also best- selling author of many books like Under Fire, One More Mission, War stories-Operation Iraqi Freedom, The Assassins, Mission Compromised and The Jericho Sanction. He released his book North’s American Heroes nationally on May 6, 2008.

Oliver received his promotion to Lieutenant in the year 1983 and won Silver Star, Bronze Star Medal and two Purple Heart medals for his combat service.

North was charged with the murder of sixteen Vietnamese civilians in the village of Son Thang.

Oliver North has accumulated his salary from different careers as a military, a host on Fox and as an author. Oliver North's net worth is $5 million.

The first child of Oliver North and Besty Stuart is named Tait.

The third child of Oliver North and Besty Stuart is named Sarah North.

Stuart is the only son of Besty and Oliver.