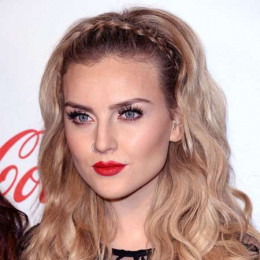 Perrie Edwards is an English singer better known as the lead singer for the hit girl pop group "Little Mix" alongside with Jesy Nelson, Jade Thirlwall and Leigh-Anne Pinnock. She was in the team Little Mix which is first girl band to win The X-Factor singing competition with their cover of "You Oughta Know" by Alanis Morissette. Her band has made record contract with Sony Music subsidiary Syco Music.

Discussing her personal life, Perrie Edwards is possibly single as of now but previously, she was dating a former member Zyan Malik of the English boy band, One Direction. They were rumored to be dating back when her boyfriend was finalists of the eighth season of The X Factor.

You May Like; Its Over!!! Zyan Malik and Girlfriend of nearly two years Gigi Hadid confirm break-up

Later she disclosed that they were engaged after she flashed her engagement ring on One Directions This Is Us World Premiere in London. Recently they called off their engagement due to some personal reasons.

In 2016, the singer began dating Liverpool footballer Alex Oxlade-Chamberlain with whom Edwards welcomed the couple's first child in August 2021. Edwards and her boyfriend Alex named their son Axel Oxlade-Chamberlain.

Perrie Edwards was born on July 10, 1993. She is the daughter to Debbie Duffie and father Alexander Edwards. Since her, both parents were singer, from a very young age she was inspired to be a singer. While she was small she used to perform in the school program.