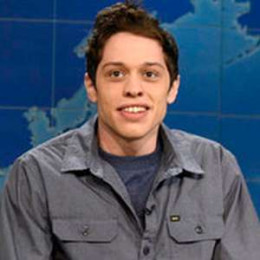 Actor and comedian, Pete Davidson is the son of Amy Waters Davidson and Scott Davidson, a firefighter, who died in service during the 11th September 2001 terrorist attacks.

Pete enrolled at St. Francis College. Davidson's earliest on-screen appearance was in the third episode of the MTV comedy series 'Failosophy' premiered on 28th February  2013. In March 2015, Davidson served as a roaster in the Comedy Central Roast of Justin Bieber.

Davidson joined the cast of Saturday Night Live with its 40th-season premiere, which debuted on September 27, 2014. In 2014, he acquired a role in a Fox comedy pilot, 'Sober Companion', but it did not make it to series.

Pete Davidson dated Carly Aquilino, Girl Code star from 2014 to 2015. As of May 2016, he started his relationship with Cazzie David, daughter of Larry David, a comedian. The son of Amy Waters Davidson also had a romantic affair with Cindy Crawford's daughter, Kaia Jordan Gerber.