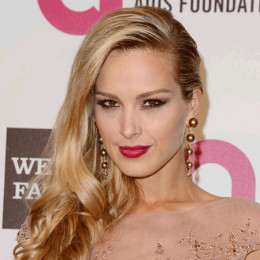 A Czech model, television host, and philanthropist who is famous as founder and chairwoman of the Happy Hearts Fund. She was signed by the streets of Prague before she was hired by NEXT Model Management. In 1995 she won Czech Elite Model Look after which her modelling career flourished. She has already worked in the campaigns of popular companies like Benetton, John Lewis, Lancaster, Hewlett Packard/Intel, HS, Intimissimi, La Perla, La Senza, Maidenform, Max Factor, Pantene Pro-V, Bulgari, Cartier, Clarins, Cortefiel, Dirk Bikkembergs, Fortunoff, Graff and so on. She is also former Victoria's Secret model.She has been featured in popular magazines like Flare, Vegas, Glamour, FHM, Madame Figaro, Elle, Shape and Cosmopolitan. She was awarded with "Survivor Award" in 2005 for her charity work by Glamour magazine.

Exploring her personal life, she was briefly engaged to her ex-boyfriend who is English actor but the engagement was called off because of her fiance's death due to tsunami in Thailand. She has dated no. of celebrities including famous actors and famous singers. She was rumored to be dating legendary actor Leonardo DiCaprio. Currently she is in relationship with former Prime Minister of Haiti. She has not been a biological mother yet.