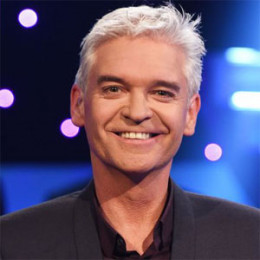 Phillip Bryan Schofield is an English television presenter currently working for ITV. He is well known for presenting the lifestyle program This Morning. He co-hosted the show from 2002 and worked for other programs too. Schofield has also co-presented numerous television shows with Holly Willoughby, Fern Britton, and Christine Lampard.

Phillip Schofield is married to a former BBC production assistant, Stephaine Lowe since March 1993. Before turning the boyfriend-girlfriend relationship into holy matrimony they dated for years. Schofield met Lowe during BBC's Children's Television.

The ITV host and his spouse Stephanie are united as a life partner for over twenty-six years now. Amid the longterm conjugal relationship, the two never had any personal issues nor involved in divorce rumors.

Since their marriage, the couple shares two children. Both of them are daughters Molly Lowe(born in 1993) and Ruby Lowe(1996).

Philip Schofield Came Out As Gay

Philip Schofield opens up about being gay on 7 February 2020 during an interview with Holly Willoughby on the show "This Morning". He made the decision which is sensual and sensual for his head.

The shiny-white haired doesn't want to hide anything from his family, therefore, he chose to put out a statement that is something very personal to him. He wrote:

"You never know what is going on in someone seemingly perfect life. What issues they're struggling with or the state of their well-being and so you won't know what has been consuming me for the last few years with the strength and support of my wife and daughters".

Schofield has been coming to terms with the fact that he's gay which is something that caused some heartbreaking conversations at home. He' ve been living with Stephanie for nearly 27 years and shares two grown-up daughters Bali and Rubby.

Despite their own confusion yet his family helped him so close they have tended to cheer him up to smother him with kindness and love. Right now, he is feeling pain and confused but it comes only from the hurts he's causing to his family.

On 8th November 2012, Schofield interviewed the prime minister of that time David Cameron on This Morning, also presented him a list he had obtained from the internet of five people called as pedophiles in connection with the North Wales child abuse scandal.

The list included the names of several ex-senior conservative politicians. Later, Schofield apologized and he along with ITV also paid £125,000 compensation to Lord McAlpine.

How Much Is Philip Schofield's Net worth?

Phillip Schofield earns a good amount of money as an English broadcaster. He has made his appearance in several shows including, Dancing on Ice, The Cube, and All-Star Mr and Mrs.

One of his most notable appearances in the television show This Morning, he earned £600,000 annually. He also generates money from his other credits on television, and radio channels. Recently, Schofield signed a £2 million 2-years extension contract with ITV.

Schofield owns a beautiful home in Fawley, Henley-on Thames, Oxfordshire, England, and is living a happy life with his wife and children. He also owns a vintage Volkswagen Beetle. As of 2017, Schofield's total net worth is estimated to be $12 million.

Besides, Schofield is also a sponsor of the charity CHASE hospice care for children, which provides help and support to families of children who are not expected to live until nineteen years.

On 8th October 2012, he was listed as an Honorary Patron of the Blue Lamp Foundation, which is a United Kingdom-based charity that collects money to support emergency services for those who have been injured while at their duty.

At age nineteen, Phillip Schofield shifted with his family to New Zealand, where he began his television career as the presenter of the youth music program Shazam! on 23rd February 1982. He served two years for the Auckland-based station Radio Hauraki.

In the year 1985, he returned to Britain. Schofield became the first in-vision continuity presenter for Children's BBC on weekdays for 2 years from 1985 September.

In 1990, Schofield enrolled into adult-oriented television with various programs for ITV, such as Ten Ball, Schofield's TV Gold, Schofield's Quest. He started presenting The British Soap Awards from 2006.

In 2013, it was announced that Dancing on Ice was about to finish following the 2014 series. Phillip Schofield will return to Dancing on Ice in 2018, as ITV decided to reboot the series after a long gap of four years.

In March 2014, Phillip Schofield served as the narrator for one-off ITV-2 show Educating Joey Essex. In December, he undertook a live 24-hour TV marathon to raise money for Text Santa, at the time he also appeared on This Morning.

While he was working as a presenter of Going Live!, Phillip Schofield also served as a broadcaster on BBC Radio 1 with a Sunday show. When Radio 2 made the switch from medium wave to full use of FM stereo in 1988, he was one of the presenters selected to associate with the launch.

Because of a miscommunication, and the crowd getting disappointed by Mayo's failure to appear, Schofield and an unnamed producer fled without disclosing the news, and left the crowd. In 2010, Phillip Schofield launched Radio Plymouth in Devon.

Phillip Schofield was born on 1st April 1962 in Oldham, Lancashire. He was raised in Newquay, Cornwall by his father Brian Schofield, and mother Pat Schofield. He is White in ethnicity and holds British nationality.

Schofield joined Trenance Infant School and Newquay Tretherras School. At age fifteen, he made a debut in media from a Sunday show Hospital Radio Plymouth.

After several years of sending letters to the BBC, at seventeen, he got the position of booking clerk and tea boy for BBC Radio at Broadcasting House in London, during the time Schofield was the youngest employee of BBC.

Phillip Schofield first met Stephaine Lowe during their work for BBC's Children television. Since their marriage the couple shares two children together.

She is the elder daughter of Schofield and Stephaine Lowe.

Ruby Lowe is the second child of the pair born after their marriage, whereas her sister was born the same year their parents married.