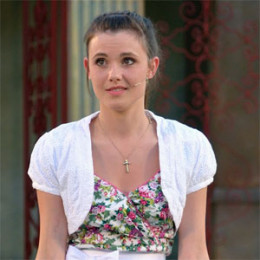 Poppy Drayton is a well-known British actress who rose to stardom after portraying the character of Elizabeth Thatcher in the feature-length Hallmark Channel TV pilot of When Calls the Heart. She has also recognized for her appearance in the MTV fantasy show The Shannara Chronicles as Amberle Elessedil.

Poppy Drayton was born on June 7, 1991, in Surrey, England, UK. Her birth sign is Gemini. Regarding her nationality, she is a British belonging to the White ethnicity.

Drayton began her acting career at a very young age. She first appeared in 2012 in a short movie. Later she was offered a role of Elizabeth Thatcher in the Hallmark Channel television movie pilot for When Calls the Heart.

The following year she appeared in the  MTV fantasy drama series The Shannara Chronicles as Amberle Elessedil which aired on TV on 5 January 2016.

In February 2016, she was cast in the MVP Studios' film The Little Mermaid. Some of her notable projects include; Downton Abbey, Midsomer Murders, Unhallowed Ground, Writers Retreat and much more.

Poppy Drayton, 28 is possibly single at present. She has managed to keep her personal life low profile. She seems busy with her ongoing projects and is seen rarely talking about her personal life.

Drayton has posted several pictures with her male friends on Instagram but has not confirmed her relationship with any of them.

Details about her past affairs and boyfriends are still behind the bars.

Drayton is one of that actress who grabbed success in a short period of a career. She has a net worth around $2 million. She charged an astonishing amount for her appearance on TV and films.