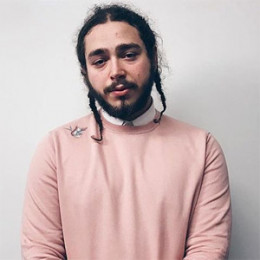 Post Malone is a new sensation in hip-hop music industry and Pop Music. He is American rapper, singer, songwriter, and record producer best known for his Billboard hit single "White Version". The 22 years old rapper got famous from the popular collaboration with Kanye West for his track "Fade".

Post Malone is a new sensation in hip-hop music industry and Pop Music. He is American rapper, singer, songwriter, and record producer best known for his Billboard hit single "White Version". The 22 years old rapper got famous from the popular collaboration with Kanye West for his track "Fade".

He is rumored to be dating Ashlen and is most popular for his dirt looks having gold teeth and braids. Post Malone has also done an opening act for Justin Beiber's Purpose World Tour in 2016.

Recently, he got into controversy for his criticism on Donald Trump and Hillary Clinton during the presidential election.

Born on 4th July 1995 in Syracuse, New York, Austin Richard Post was raised by his father Rich Post and his stepmother Jodie Post. His father Rich Post had been a disc jockey in his youth. It was his father who introduced him to the different genre of music. Then Post Malone started getting inclined to the hip-hop, country, and rock.

When Malone was 9 years old, his family moved to Grapevine, Texas as Rich Post became the manager of concessions for the Dallas Cowboys. Post started playing in his early years and auditioned for the band Crown the Empire in 2010. Post did not get selected for the audition as his guitar strings broke down during the audition. 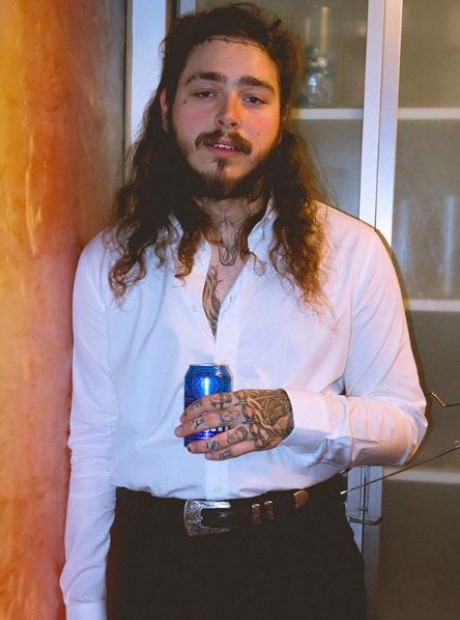 Post Malone posing with can beer during his early concerts
Source: Capitalxtra
He credits his initial guitar skills to the guitar learning popular video game Guitar Hero. And according to him, his professional music career began when he started playing in a heavy metal band. Later he transitioned into softer rock and hip-hop.

Post Malone created his first mixtape, Young and After Them Riches at the age of 16, using Audacity. He showed his work to his classmates and even voted “Most Likely to Become Famous” in his high school. He also worked at a Chicken Express as a teenager.

He got enrolled at Tarrant County College but dropped out. Then Post Malone moved to Los Angeles, California with a long time friend and a professional game streamer Jason Probst. He chose his stage name Post Malone at the age of 14. He also explains that he got his name from the rap name generator inserting his last name Post.

In LA, Post and other musicians and artists formed the music group BLCKVRD and recorded multiple tracks together. The group moved into a house in San Fernando Valley.

While working with BLCKVRD, in San Fernando Valley, Post got introduced to 1st down and Rich from Fki.  With Fki and Rex Kudo, Post recorded several tracks. One one the major success with collaboration with Fki and Rex Kudo is his track “White Iverson”. 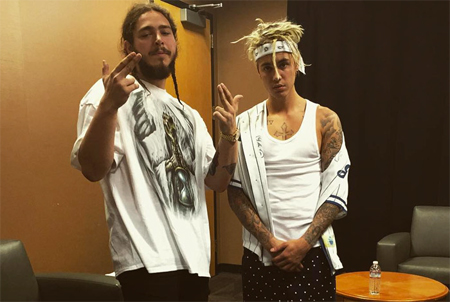 After huge success from the single track “White Iverson” which got over million views within a month, Post Malone became famous and started getting several offers from different record labels. In August 2015, Post signed a recording contract with Republic Records.

Post got an opportunity to work with a number of prominent rappers such as 50 Cent, Young Thug, and Kanye West. It was at the birthday party of Kylie Jenner in 2015 when his performance attracted Kanye West leading to their collaboration for the single “Fade”. Kanye West and Post Malone’s track Fade got widely praised bringing him more fame in the music industry.

In 2016, he also performed an opening act for Canadian singer and songwriter Justin Bieber’s Purpose World Tour after he started having a close friendship with him. Later in April 2016 Post Malone premiered his singles “Go Flex” on Zane Lowe’s Beats 1 show.

Again, in May 2016 Post released his full-length mixtape titled August 26. It was the reference to the release date of his debut album. On June 9, 2016, Post Malone made his first television appearance on Jimmy Kimmel Live!, performing “Go Flex”. 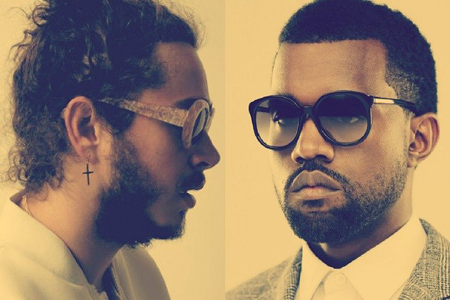 Picture of Post Malone and Kanye West linked during their collaboration
Source: All Hip Hop

He made to the Billboard Hot 100 through his single “Congratulations” featuring Quavo at the number eight. His first album was Stoney featured Justin Bieber in the tracks “I Fall Apart” and “Deja Vu”. Later in 2017, the album got certified with double platinum by the RIAA.

In early 2017, he revealed his new project Beerbongs & Bentleys. But, its released date got postponed to 2018. Post Malone released his first single from the album in September 2017. The track “Rockstar” featuring 21 Savage got into Billboard Hot 100. It holds the number one position for eight consecutive weeks.

In 2017, Rolling Stone mentioned him as “One of the most popular musicians in the country”. Recently Post Malone and Ty Dolla Sign collaborated for the song “Psycho” in 2018. The song entered number 2 on Billboard Hot 100. It is his third entry in the TOP 10.

Post Malone has stated to release his pre-mentioned album Beerbongs & Bentleys on April 27, 2018.

Post Malone has recently captured the limelight in the music industry and gained fame worldwide. Within his short career, Post Malone has got successful commercially too. His net worth is still the hot topic but he is estimated to have the approximate over $1 million net worth.

Post Malone has also earned through different brand promotion and endorsements. He has been the part of the official promotion of the new famous wine Luc Belaire Rare.

Malone has been posting pictures on various occasion posing with the Belaire. Belaire is a new loved wine brand. A bottle of Belaire Rose wine costs nearly $25.

Post Malone was raised by his father, a former disc jockey and his stepmother Jodie Post. Post Malone solely credits his musical inspiration to his father. Post Malone is American and White but he has a unique personality making everyone confused about his race.

Post Malone has golden teeth and braids which is more popular in the media. Post Malone describes that his braids and teeth are nothing but his personal interest and he is not going change due to the controversy created by them.

Post Malone has been rumored to be dating a lady, Ashlen Diaz. Post and Ashlen started dating after they met at a party and from attending Justin Bieber’s Purpose Tour. Later, the couple was captured sharing their relation in local radio channel interview. Media has not discovered much information about Ashlen and they are secretly dating each other till now. 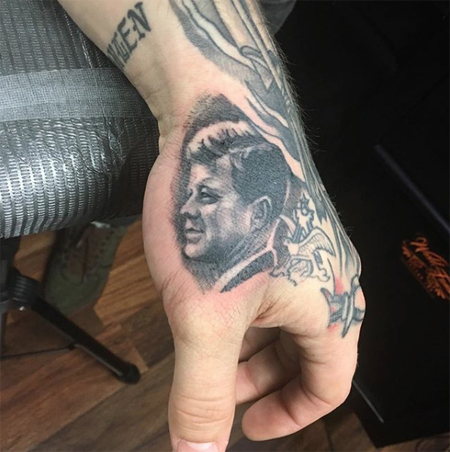 Post Malone stands at the height of 6 feet and belongs to cancer star sign. Recently it is also rumored that Post Malone has a daughter. But no any media has confirmed the gossips and the truth is still unknown.

Post Malone has a tattoo of US President John F. Kennedy on his arm. According to him, Kennedy is the only president that speak out against corruptions, unlike other governments. In an interview, he reveals owing a myriad of guns and believes it to be the right of every American.

Post Malone has a number of tattoos many being in his face. Malone has a barbed wire tattoo across his forehead and up-side-down music note under his eyes. He also has tattooed "Stay Away" above his right eyebrow.

Lately, he also got into controversy for criticizing Donald Trump and Hillary Clinton in the presidential election of 2016 when he stated that neither of the two is eligible for becoming the President.