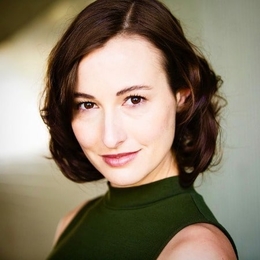 Rachelle Dimaria is an American actress, writer, and producer acknowledged for her roles in the 2018 Horror films Grandma's House, Justice for Vincent (2019), and Chasing Life (2014). Dimaria has been working in the American entertainment industry for over three decades, and her determination toward her performance makes her a leading lady in the entertainment media. The lady is now a prominent personality in America, all thanks to her devotion to her hard work.

What is Rachelle Dimaria's Relationship Status? Know Details About Her Personal Life

Rachelle Dimaria married her long-term boyfriend Jordan Christopher Belfi, a famous American Tv personality who came into the limelight for his appearance as  Adam Davies on the HBO series.

The love partner met each other in the summer of 2014 and fell in love during the shoot of the film Badlands of Kain. Belfi proposed to Rachelle astonishingly with a beautiful ring in the sunset. After Rachelle accepted his proposal, the couple decided to strengthen their bond with their married life.

On 27th October 2018, the beautiful couple tied knots and exchanged their vows with each other in the witness of their family, relatives, and close friends in Los Angeles, the United States. 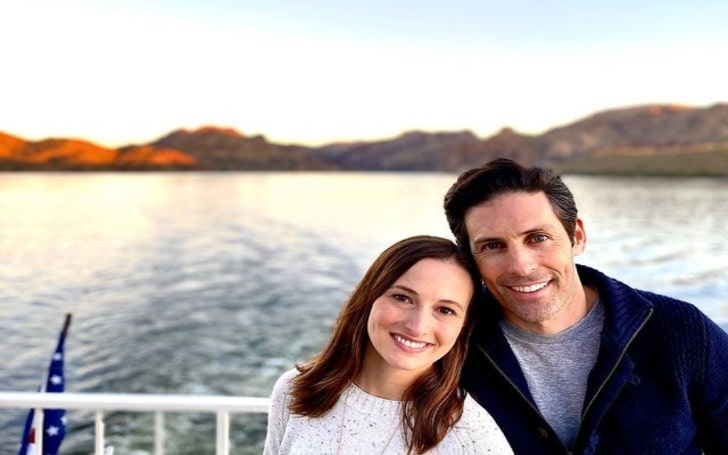 The attractive partner is newly parent of a baby boy named Rocky Elios Belfi, born on 1st December 2021. Both enjoy their married life without any controversies or fights since marriage, and they are perfect examples of power couples.

About Her Marriage Ceremony

The famous actress Dimaria and her loving California-born husband Jordan Belfi married gracefully to Christian rituals on 27th October 2018 in her hometown Los Angeles with the involvement of the couple's family, friends, relatives, and media partners. The better half wanted to make their precious day memorable with their loved ones. 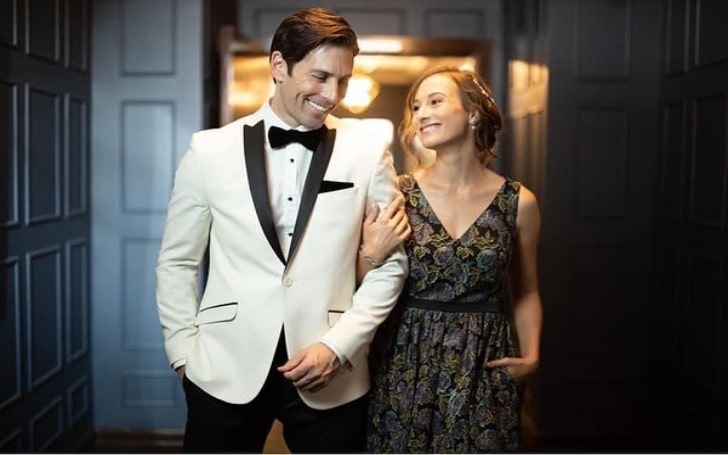 Jordan and Rachelle threw a grand wedding reception to their close circles and industrial friends at Oviatt Penthouse at S Olive St, LA, CA. After creating good memories of their wedding, they share beautiful and strong compatibility.

Even after three and half years of marriage, news regarding their separation and affairs is not in the headlines. They are joyful with each other's company and share posts showering their love, support, and care towards each other on social media. They are in a good relationship traveling to romantic places and supporting one another in difficult moments.

One of the talented actresses of the era, Rachelle Dimaria, was born in Phoenix, Arizona, United States, where she spent her childhood days in Albuquerque, New Mexico. Similarly, Rachelle lived in Ireland for three years and educated her high school at Irish Catholic School. Talking about her qualification, the multitalented lady holds a bachelor's degree and graduated from the University of Northern Colorado three year drama program. Rachelle wanted to earn fame from the beginning of her young age as she waS passionate about her dream job. 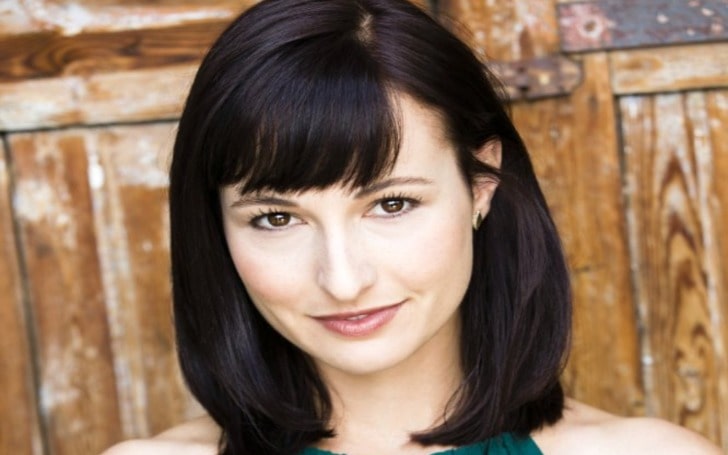 There's no doubt that Dimaria is an outstanding performer and determined as an actor of her generation. She has appeared in 400 to Oahu, American Bred, Claire of Find me, Badlands of Kain, and The Bold and Beautiful. Besides acting, Rachelle has a significant occupation as a producer of many theatrical dramas and Tv series and an accomplished writing career. 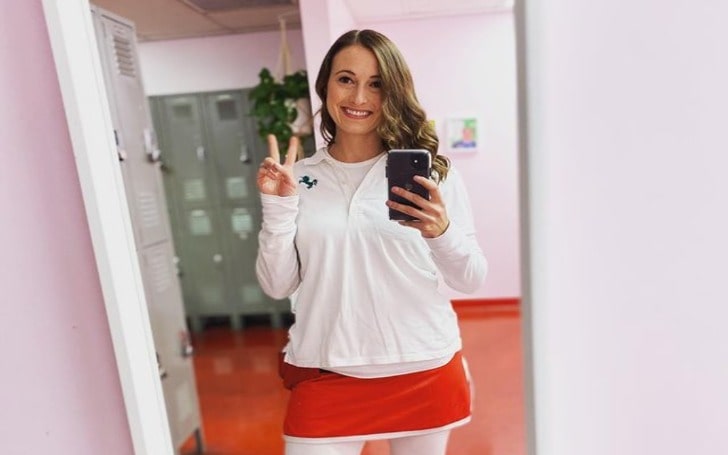 Rachelle Dimaria has almost thirty movie and TV credits in her career as an actress. SOURCE: [email protected]

The American actress Dimaria was honored as the best leading actor in the 2018 horror film Grandmas House and the 2014 film 400 to Oahu at Indie Fest Film Award. Moreover, she is known for her role in Alan Clay's film Courting Chaos, for which she was nominated for Best Actor at World Fest Houston International Film Festival. She is more fascinated by creativity and arts and even celebrated by the audience for the achievements that she gained at a young age. She inspired many other girls who wanted to establish their existence in the film industry through her work, not words.

Dimaria is a proud mother of her newly born baby boy, Rocky Elios Belfi, with her husband, Jordan Belfi. The star brought a new life on 1st December 2021, when she shared her happiness of enjoying motherhood with his cute little boy through her emotional post on Instagram. The media sensation had never planned their baby before 2021, but now they are blessed with their first child with new hopes and cheerfulness. 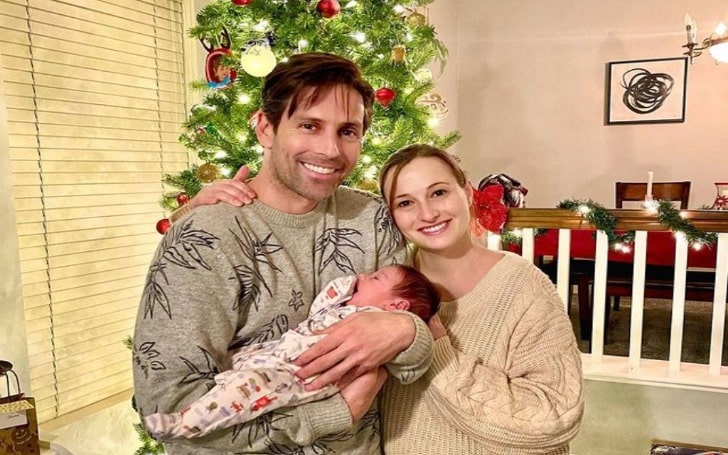 Just recently on the occasion of Mother's day, Rachelle's spouse Jordan dedicated a post to his beloved wife. The post had several pictures of his baby boy and the child's mother holding him. 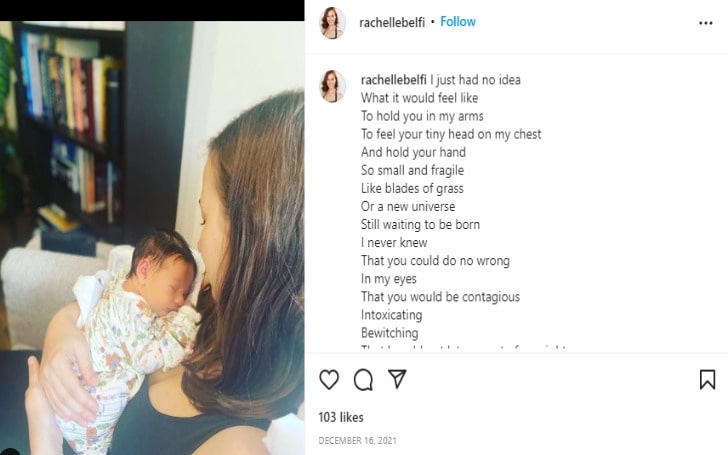 The All American star wrote, "Happy FIRSt Mother's Day to the most incredible mom ever. Watching you blossom into the most loving, thoughtful, selfless, caring mother has been nothing short of inspiring, Rocky and I both hit the jackpot."

Well, that's just lovely, and hopefully, we get to see more joyous moments in the future too.

Everyone knows that Rachelle is fun-loving and shares every precious moment of her life with her family, her baby, and her husband through pictures and photos. She even shares posts of her work, films, and projects. Dimaria is an animal lover too. She has a special love for animals which is clear from her loving quotes and videos on her social media handles. 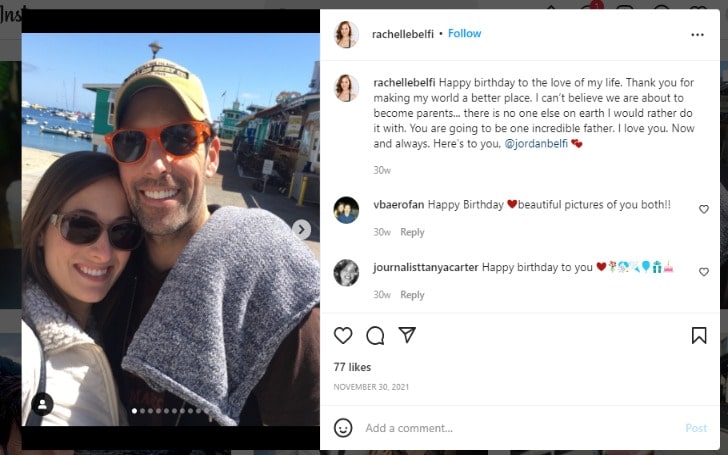 What is Rachelle's Net Worth?

Rachelle Dimaria is a well-established and independent media star who has impressed fans through his fascinating acting and stunning arts in the entertainment industry. Her principal source of earning is from acting multimedia as she is the household name contributing her roles as an actor for over three decades.

Furthermore, she is a professional writer and intelligent producer who charges well for her talent and spontaneous work. According to the media sources, her allocated net worth is $300,000. In comparison, American actress Ali Skovbye has a net worth of $1 million.

Rachelle is married to Jordan Christopher Belfi since 2018, the couple are evergreen off-screen love birds with longlasting relationship