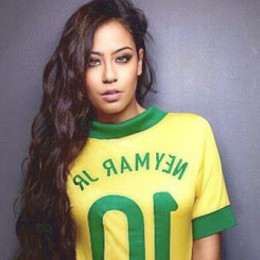 She is a professional model, who models for Elleven Wear, a fashion store based in Santos. She got media's attention as a sister of world-class Brazilian footballer Neymar.

Rafaella Beckran is unmarried but as per some online sources, she is dating  Santos star Lucas Lima.

As she is so charming and attractive, she might have been through lots of dates and breakups in her last days when she wasn't that famous.

Rafaella Beckran came to prominence as the sister of Football star, Neymar da Silva Santos Junior. She is a popular Instagram star,  she garnered more than 4.6 million followers on Instagram.

Rafaella Beckran was Rafaella Da Silva Santos on March 11, 1996, but she later changed her surname to Beckran because of her intense fandom of the British legend footballer David Beckham.  She is the daughter of Nadine Santos and Neymar Santos Sr.