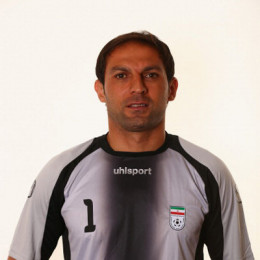 Rahman Ahmadi is famous for his excellent effort to stop goals. He began his career as a local player at Shamoushak Noshahr. He also helped his team Sepahan to win Iran Pro League. He was also honored as the Number one goalkeeper of Irani Football team.

Rahman Ahmadi is an Iranian goalkeeper born on 30th July 1980 in Noshahr, Iran.

When he was 9 years old, he used to see his friends playing football and joined them and later, football become his passion.

In 1998, he began his career as a local player for Shamoushak Noshahr. Later, in 2000, he made it to the senior team, where he got the opportunity to perform for four years.

In 2008, he was assigned to Sepahan and led his team to win Iran Pro League however he only made four appearances.

Later, in 2010, he was transferred to Persepolis club where he made total 16 appearances. But he returned to Sepahan in 2011, disappointed with his playing time. In the season he made total 38 appearances and led the team to Iran Pro League.

In the 2013-14 Iran Pro League, Rahman contributed Sepahan to earn 4th place. With 15 clean sheets, he was considered one of the best keepers in the league.

Ahmadi made his debut representing Iran in 2008 in WAFF(West Asian Football Federation Championship) against Jordan. He was honored as the number one goalkeeper of Irani Football team by Carlos Queiroz. He played a vital role to secure a place in the 2014 Fifa World Cup for Iran making two impressive saves to secure a 1-0 win against South Korea.

He Currently plays for Paykan in the Persian Gulf Pro League.

When it comes to his private life, Rahman Ahmadi has maintained a low profile. Though, there are rumors about him being married but has not revealed anything about his wife. It seems that he likes to keep his family away from the media.

The 36 years old Iranian goalkeeper, Rahman Ahmadi has lots of fan followers and famous for his excellent effort to stop balls even in a hard situation. His net worth is under review but he received 6 million USD per game.