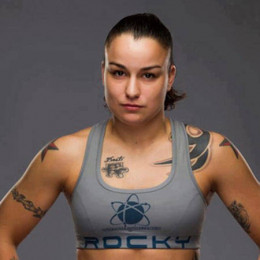 American mixed martial artist, Raquel Pennington is the competitor in Ultimate Fighting Championship women's bantamweight division. She graduated from Harrison High School (Colorado Springs) in 2007 as secretary of the National Honors Society, with many athletic and academic scholarships. Pennington made her promotional debut against TUF 18 teammate Roxanne Modafferi on 30th November 2013 at The Ultimate Fighter 18th Finale.

Pennington is openly lesbian and is in a relationship with another mixed martial artist Tecia Torres.

Raquel Pennington was born Raquel Len Pennington to Rose Pennington on 5th September 1988 in Colorado Springs, Colorado under the birth sign Virgo. Pennington is American as per nationality and as far as her ethnicity is concerned, she is White.

Pennington used to play several sports like basketball, volleyball, softball, and running cross country from the early age. Even if she played several sports, she was interested to box.

In 2007, she graduated from Harrison High School as secretary of the National Honors Society. She then joined the University of Colorado Colorado Springs in an academic Scholarship.

Raquel Pennington began practicing martial arts at 19 years old, however, at first her parents would not let her battle. From 2009 to 2011, she competes in amateur MMA and has a record of 7 wins and 1 loss. In March 2012, she made her professional debut against Kim Couture, in which she won by TKO.

On 28th July 2012, Pennington made her Invicta Fighting Championships debut against Sarah Maros at Invicta FC 2 where she won by unanimous decision. At both Inviat FC 3 and Invicta FC 4, she lost against Cat Zingano and Leslie Smith respectively.

Congrats to my little badass @teciatorres for her awesome performance tonight. I'm beyond proud of you and honored to be by your side supporting you through whatever life brings your way as a lover, a friend, and a teammate. I love you #teamtiny #teamrocky #toyotacenter #wmma #ufchouston #reebok

In 2013, Pennington was announced as a cast member of The Ultimate Fighter: Team Rousey vs. Team Tate where she defeated Tonya Evinger. On 30th November 2013, she made her promotional debut against Roxanne Modafferi at The Ultimate Fighter 18 finale and won the fight.

She then participated in several tournaments. As of 2018, she made her comeback at UFC 224 after a long gap. She lost the match against Amanda Nudes in a UFC Women's Bantamweight Championship.

The martial artist, Raquel Pennington has an estimated net worth of $ million, but, the amount is not made official yet. Pennington surely earns a good amount from her martial arts career.

As per some sources, Pennington earns $13k as a salary which includes 100k to show and $30k fight week incentive pay. Besides, in April 2017, she along with her partner, Tecia Torres bought a house which she revealed via Instagram.

Thank you for showing me a love I never knew, being such an amazing girlfriend, and treating me like a Princess. I love you babe. I can't wait for this next chapter in life with you. Our home is beautiful and the memories will be just a sweet! I will forever remember our first day spent in our home. #Repost @raquel_pennington with @repostapp ??? Welcomed my love home to the house I bought for us picked her up from the airport and surprised her with a custom made key chain of two hearts one saying love and engraved with welcome home and the other heart engraved with T&R and the date I closed on the house with the keys to the door and the door decorated in our favorite colors with balloons. @teciatorres I look forward to new beginnings and what life will bring our way. Te Amo mi reina #teamrocky #teamtiny #love #wmma #ufc #surprise #shesbeautiful #newhome #newbeginnings #thiswelldefend #gruntstyle

The couple got engaged on 14th May 2014. They announced it via Instagram with a photo where Pennington was proposing Torres.

She asked, I said YES!!!! #Engaged ---- Our love began unexpectedly. It started as a crush and grew into an amazing love. In this moment you made my dreams for us come true. Everyday you show me a love so true and pure. I am blessed to wake up to you every morning and fall asleep in your arms at night. I can't wait to become Mrs. Pennington. I love you with my everything!! Always! @raquel_pennington

The couple is living a happy life togetehr without any breakup rumor. Besides, she has a godson.

Check out the interview with Raquel Pennington: