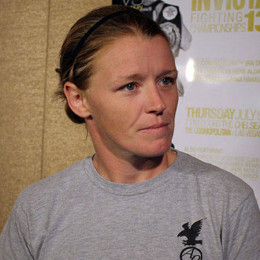 Tonya Evinger is an American Mixed martial artist who fights for Invicta Fighting Championship. She is the current Invicta bantamweight champion. Evinger is currently #9 ranked 135-pound female MMA fighter in the world according to the Unified Women’s MMA Ranking and #11ranked according to Fight Matrix. Evinger has two younger twin brother, Chris, and Owen, who are also profession mixed martial artist. Tonya was a nominee for Best Female Fighter at the 2016 World MMA Awards.

Tony Evinger was born on 4th June 1981 in Odessa, Missouri under the birth sign Gemini. Evinger is American by nationality and belongs to White ethnicity. Her parents raised her with her younger twin brothers, Chris Evinger and Owen Evinger. Both of her brothers are professional mixed martial arts fighters.

Evinger attended Odessa High School where he played football and did wrestling. She then earned a degree in Missouri Valey College. While studying in the college, she used to wrestle.

Toya Evinger started her career at IFC: Warriors Challenge in 2006 where she faced Jennifer Tate but lost the match. Her first fight was the first women's bout ever sanctioned by the California State Athletic Commission.

ON 17th February 2007, she defeated Brittany Pullen at FFF 1: Asian invasion via a 16-second knockout in teh first round. The same year, she defeated Shonie Plagman at X-1: Extreme Fighting 2.

On 15th September 2007, Evinger made her debut for Elite XC at EliteXC: Uprising against Gina Carano but lost the fight. The following year, she defeated Julie Kedzie at ShoXC: Elite Challenger Series. 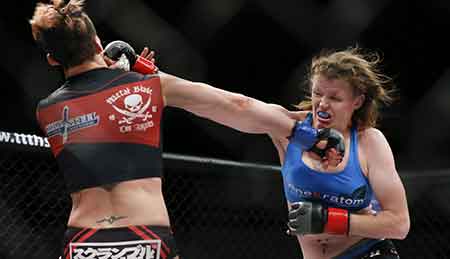 At Ranging Wolf7: Mayhem In The MIst on 8th May 2010, Evinger faced Alexis David for the Raging Wolf Women's Flyweight Championship but lost the match. On 13th April 2012, she defeated Lacie Jackson via knockout in the first round at the Fight Me MMA. The year, she made her flyweight debut against Carina Damm at Fight Hard MMA.

Evinger was announced that she was one of the fighters selected to be on The Ultimate Fighter: Team Rousey vs. Tea, Tate in 2013. In the elimination fight to get into the TUF house, she lost the fight against Raquel Pennington.

Tonya Evinger, the martial artist, has an estimated net worth of $ million, however, the amount is not made official yet and is still under review. In 2016, she earned a salary of $ 20k salary from her career. The following year, she earns a salary of $100k from UFC 214. She also earns $100k for competing in the UFC tournaments and more after winning.

With such earning, she is maintaining her lavish lifestyle.

Tonya Evinger is one of the hottest female fighter as well as a female gay fighter. Though she is open about her sexuality and openly gay, she does not seems to be dating anyone right now. And even if she is dating anyone she seems to keep in low profile as there is no news on her affairs or relationship.

Evinger was in news for kissing her co-star and anchor after puking but that was only a part of the fun. In 2017, she kissed Laura Sanko afterInvicta title defense. Sanko took the gesture in a positive way,

Previously, she mentioned MMA Fight, Stephanie Alba aka The Cyclone'' as her girlfriend in several tweets. They, however, has not confirmed anything regarding their relationship.

In August 2018, she again mentioned another model, Bella Burke as her girlfriend but has not spoken anything about their relationship.' So, as of 2018, Evinger is unmarried and is also not dating anyone.

Check out the interview with Tonya Evinger: