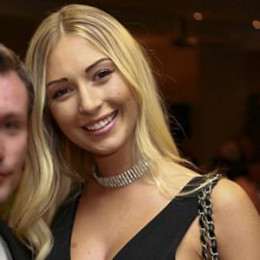 Rebekah Ward is a British model, who came to lime light after she was spotted together with a British actor, Dean Gaffney, better known for his role Robbie Jackson in the BBC soap opera EastEnders.

Rebekah Ward was born and raised in Peterborough, United Kingdom. She attended The Deepings School from 2009 to 2011 and joined the University of Lincoln, where she completed her bachelor degree in Law (LLB), in 2014. From early days, she was interested in acting and modeling.

During her higher education, she started working as a receptionist in Terrell’s LLP Solicitors for six months. From 2013 to 2014, she worked as a Sales Assistant in Miss Selfridge and later, she pursued her career in modeling.

She actively participated in social sites including Instagram and day by day her fans following in social media increased. From her Instagram account, we can see her bold and skinny look in the different corner of the world. Recently, she spent her vacation in the city of Abu Dhabi.

Rebekah is dating her boyfriend, Dean Gaffney, a British actor, since April 2016. The couple started dating after Dean broke up with his girlfriend, Sarah Burge and the reason behind their separation was Dean’s love affair with several women, which he himself announced in social media.

Rebekah and Dean first met through the help of a mutual friend. Then the couple started seeing each other and were spotted in different events including Hang Dr. Party in Soho, London, in 2016.

The couple has an age difference of 16 years, despite they have a strong bond. Often rumors fly around criticizing their age gap, the pair has steady relationship.

Also, she is really close to Dean’s twin daughters Chloe and Charlott, 19 and has shared the snap alongside the gushing caption: “How he created these two beautiful stunners I will never know!”. The couple is still together and enjoying romantic life.

Rebekah along with her boyfriend, Dean has an estimated net worth of $4 million.